The best investment funds today (backed up by data)

You’re probably not a good investor…

These aren’t my words.

As described by Dan Solin, the New York Times bestselling author of ‘The Smartest’ series of investing books and The Smartest Sales Book You’ll Ever Read.

According to Dan, the “average investor” tends to panic when markets drop.

This causes them to miss out on the relatively few days when the market posts stellar returns.

Because of this, they enjoy annualised returns of just 2%.

Barely keeping up with inflation.

Dan didn’t make this figure up.

An analysis of returns for the 20-year period from December 31, 1993-December 31, 2013 found the annualised returns of the “average investor” hovered around 2% for that period, which didn’t even keep up with the pace of inflation.

Part of the problem is the kind of investment products purchased.

This stems from a lack of unbiased data and available information for the average investor.

As such, here’s my personal view of 5 types investments.

Where are you on this hierarchy?

5. Hedge funds (in tech terms, think back to ‘the brick’
car phones of the late 80s)

Someone once told me hedge funds are for “stupid, rich people.” 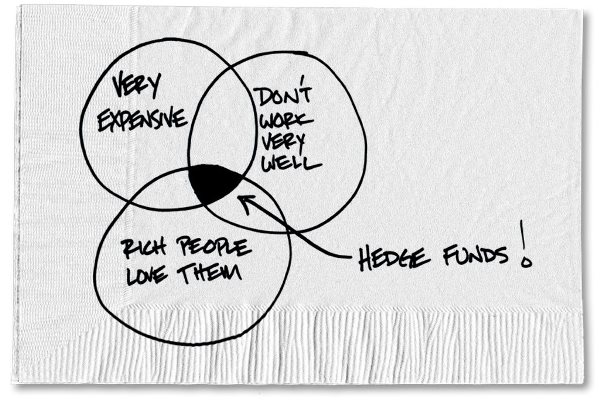 But without data, my opinion doesn’t matter.

While some 75% of hedge funds go out of business within their first 8 years, this chart shows how badly the average surviving fund does against a global stock and bond index… 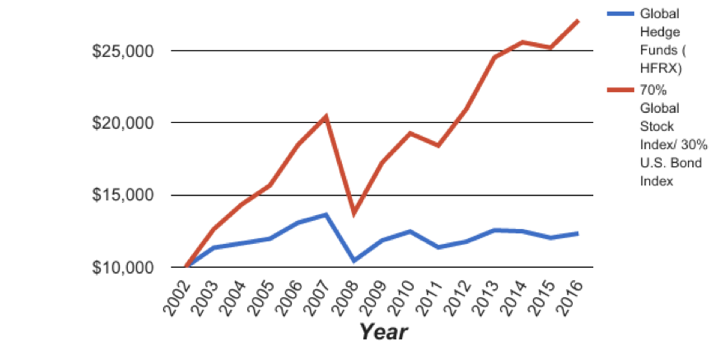 Ask a man in the street his thoughts about investing and he probably likens it to gambling.

It’s not impossible to pick a stock “winner”, but your chances of doing so are statistically exceedingly low.

Owning individual stocks, rather than diversifying through ownership of an index fund made up of similar stocks, significantly increases your risk without increasing your expected return. Think about well-known companies that once were "sure things," but are no longer around, such as Lehman Brothers, Enron and Bear Stearns.

But we know from survivorship bias, we rarely learn from failures.

I enjoyed playing Snake on the Nokia, but the Blackberry represented an upgrade (like mutual funds).

If you want to pay high fees, with the statistical likelihood of underperforming a comparable, low-management fee index fund, buy an actively managed mutual fund.

Most investors do, and their returns suffer as a consequence. 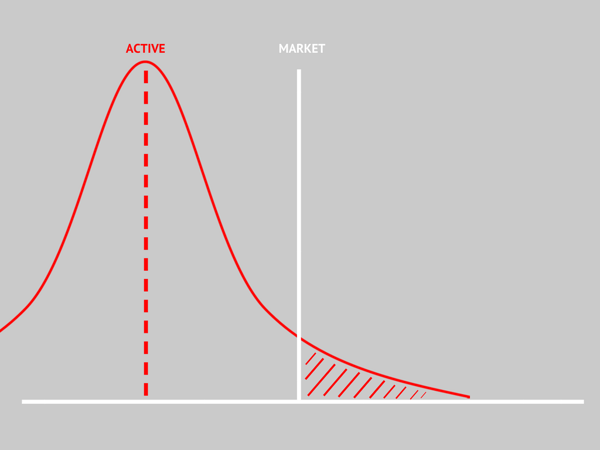 The average investor (red dotted line) in a mutual fund enjoys a return far lower than the market average return (white line) which is attributable to their high costs and the bias of the fund manager.

A few do outperform and firms such as SJP and Hargreaves Lansdown quickly add these to best buy lists.

But statistically speaking, the minority that outperform one year don’t keep this up over time, which is why most investors end up with some real dogs…

There’s a mountain of data indicating the folly of buying these funds, nevertheless they’re aggressively sold to those investors who don’t know about the data.

Lower cost index funds, in a suitable asset allocation (the division of your portfolio between stocks, bonds, and cash), are an excellent choice for investors.

Blackrock’s iShares, Vanguard and SPDR are the gold standard for low cost index funds, but there are a number of low-cost exchange-traded funds and index funds available from other providers. 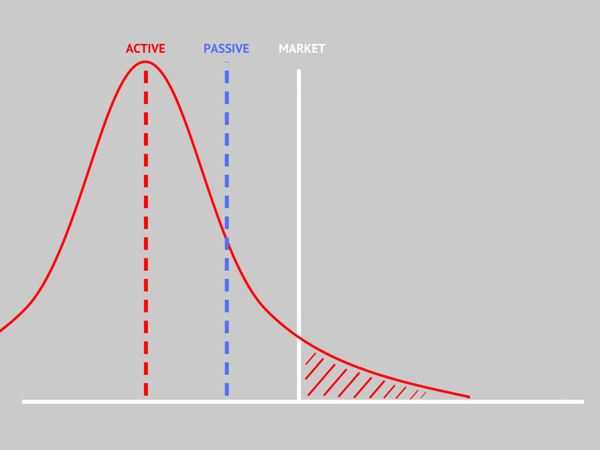 The data shows investors in these funds can do substantially better over time than active investors.

Dan sets forth the differences between passively managed funds and index funds in this blog. 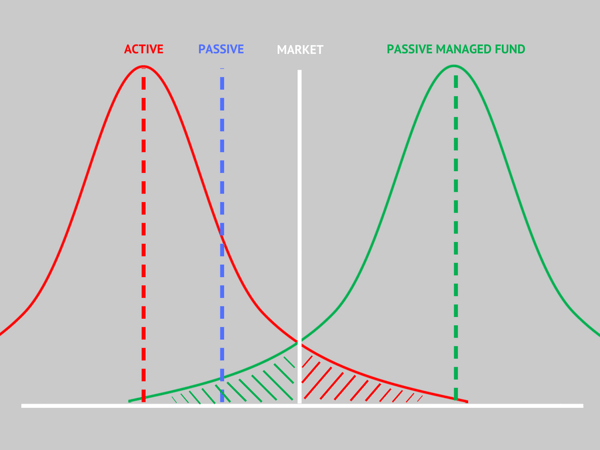 That’s because big institutions, college endowments and professional advisers who understand the data are busy loading up.

The Nokia was great in its day.

A few of my friends still hold onto their Blackberry, but its days are over.

The debate still goes on over iPhones versus Android.

My own money is in firms such as DFA moving forwards.

Get in touch if you want to learn more about better investment.