Will the tech giant Apple move the price of gold?

Apple is one the world’s leading companies at generating hype; but could the world’s greatest sales machine be about to move the price of gold?

Bullion dealer GoldCore has estimated that a gold edition of the Apple Watch could contain two ounces of gold. Going by projected sales figures, Apple could therefore use 746 tonnes of gold per year (approximately one-third of the world’s annual supply). To put that into context, India is the world’s largest supplier of gold and consumes between 800 – 1000 tonnes per year.

Another consideration is the way gold is currently used. Traditionally, the precious metal was re-used – it is possible that gold in a piece of jewellery you are wearing now was mined in Roman times. However, increasingly gold is also being used in manufacturing where it is being rendered non re-useable. Manufacturing now accounts for 12% of the metal’s annual usage and this figure will only increase.

If Apple requires the suggested amounts, this could have a substantial impact. Even if spread over a sensible timeframe, it is an enormous demand to introduce to a limited market. 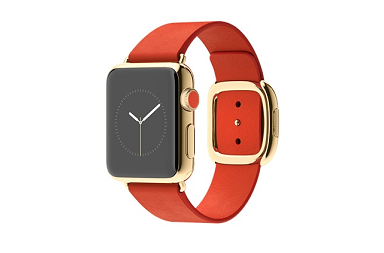 What is happening to gold prices?

Gold is viewed as a safe haven in times of trouble. However, it plays second fiddle to the world’s reserve currency – the US dollar, which has been strengthening since April 2014. When the dollar strengthens, gold doesn’t tend to do as well, and the prospects for the dollar are robust. The dollar has been reinforced so far this year by further quantitative easing (QE) in Japan, the introduction of QE by the European Central Bank, and US Non-Farm Payroll data. These results were published on 6 March, and showed a strengthening US jobs market.

At the end of last year gold rallied slightly, rising 13% between November 2014 and January (click here for an explanation as to why). However, it has since slumped, falling 2.4% this year.

But despite price falls this year, there remain several good reasons to consider holding gold.

Gold can act as a hedge against more traditional assets. Although markets have hit highs this year and look strong, there remain significant risks, which suggests holding the metal would be prudent.

While inflation is not necessarily an immediate concern, gold can also protect against it. .The significant expansion of central bank balance sheets, and increasing indebtedness of governments globally, may at some point result in a sharp upward move in inflation.

Could Apple’s new gold watch have an effect on the gold price? One suspects the company’s needs have been exaggerated, but a demand even a quarter of the size being predicted could boost the metal’s worth substantially.