What is the cost of living in Switzerland in 2019?

Of course, I am talking about Switzerland.

With its long-standing ‘no interference policy’, it should come as no surprise that the country is one of the most politically and economically stable nations in the world.

And a draw for expats from all over the world.

But how much does it cost to live there?

Switzerland is not just an attractive home for expats.

It also serves as host to a lot of international organisations, including the International Committee of the Red Cross, the World Health Organization, and the birthplace of the World Wide Web, CERN.

Add that to its reputation as the country with the best quality of life for expats, and you might find yourself a utopian home.

But just like all good things, achieving this kind of life is never without effort.

According to Mercer’s 2019 Cost of Living Survey, three of Switzerland’s cities, Zürich, Geneva and Basel, are on the top 10 list of the most expensive cities to live in, ranking 2nd, 9th and 10th, respectively.

Needless to say, being an expat in Switzerland, especially in its three main cities, is expensive.

But despite the very high cost of living, the country is the 15th most popular destination for UK expats.

One of the main reasons why Switzerland is such an attractive destination for expats is the high income that both Swiss and foreign nationals enjoy, as wages in Zürich and Geneva are considered the highest rates in the world.

But before running off to the land of all good things, it might be better to take a look at all the small but very significant details of living the expat life in Switzerland.

Previously we updated our Cost of Living in Dubai blog, and for this one we specifically focus on the cities of Zürich, Geneva and Bern.*

Finding a home in Switzerland can be a real challenge for expats as only about 40% of the population own homes, creating stiff competition for accommodation and therefore expensive rental prices.

The majority of expats live in Zürich, Geneva and Bern.

Despite being the de facto capital, the cost of accommodation in Bern is much lower (though still expensive) compared to the other two Swiss cities.

Generally, expats should expect to spend around 20% of their salaries on accommodation alone.

The most expensive Swiss cities to rent in are Zürich and Geneva, with rents on small 2-bedroom city-centre apartments exceeding CHF 2,000 month.

Renting a property in Switzerland is like applying for a bank loan.

Due to the difficulty of acquiring the best possible accommodation, homeowners demand a lot of requirements, sometimes somewhat personal, from potential tenants, which may include guarantees of financial stability and personal references from previous landlords as well as employers.

Lease agreements are usually on a 12-month basis, and it is common to pay for a 3-month deposit, which may be reclaimed when the tenancy contract expires.

Acquiring a property in Switzerland can be difficult and property prices are tremendously high.

The average price for to buy a property in Switzerland varies from area to area.

Zürich is the most expensive place, with property costing around CHF 13,000 per square metre in late 2018.

Most property purchases also require a minimum deposit of 20% of the property cost.

With all things considered, buying a property in Switzerland should never be a decision to take lightly.

Some landlords include charges for electricity, heating and water, which is around 15-20% of monthly rent, but most residents in Switzerland are responsible for their own Nebenkosten.

Utility companies are privately owned in Switzerland and offer all-in packages which sometimes reduce the overall cost of electricity, broadband and TV licences.

Gas is rarely used in Swiss households because of extreme sourcing costs.

There is also a television and radio fee of around CHF 150 per quarter or CHF 600 per year for any household or car with a television or radio.

According to Numbeo, this is an average breakdown of utility costs:

With the high quality of living in the country, it is but expected for food items to be more costly than other European cities (around 20%-30% more expensive).

Amongst our three focus areas, market prices in Bern are less expensive than the other two, with Zürich and Geneva prices neck to neck.

A single expat should expect to spend around CHF 100 per week on groceries, while a family of four can afford a variety of food choices on CHF 300 per week.

To save money on groceries, expats may opt to buy non-Swiss goods and in less expensive supermarkets, such as Aldi or Lidl.

We've compared purchasing power in different cities by making use of The Economist’s Big Mac Index.

Everything seems to be more expensive in Switzerland, including the cost of transportation.

This should be expected as Switzerland maintains the highest standards on public transport, making it easy for individuals to move from one city to another.

The ticketing system in Switzerland is more complex than in other European cities but it offers a lot of discounts.

Expats may use the Swiss Half Fare Card, which may be purchased for CHF 123 and has a validity of one month, giving commuters a discount of nearly 50% on trains, buses and boats within cities.

For expats with children, a good option can be to get a Junior Card for CHF 30, which entitles kids to travel around the country for free provided they are accompanied by an adult.

Owning a car in Switzerland is an expensive option for expats because of the extra fees, such as canton taxes, parking permits, and vehicle insurance that go along with the price of the vehicle.

On the other hand, petrol prices in Switzerland are not so different from prices in other European cities, but cars, both regular and luxury, are generally more expensive by 30%.

Therefore, if you are used to commuting in, say, London, it might be a much better idea to use public transport in Switzerland to save money.

Expats need not worry about the quality of education in Switzerland, whether their children are enrolled in public (state), private or international schools, as the country’s education standards are one of the best in the world.

Public schools generally use the language of their respective cantons, and can either be German, French, or Italian.

Public education is at no cost to expat parents, except for extracurricular activities.

However, English-speaking students are at a disadvantage, as public schools do not spend time and resources on students who cannot speak the school’s primary language.

On the other hand, there are bilingual schools that use the Swiss curriculum but use two languages.

These schools usually teach for a week in a primary language (French, German, or Italian) and another week in English.

This is a good idea for multilingual expats and those planning to settle in the country long-term.

Also, this is a plus for expat families with young children who want their kids to assimilate into Swiss culture more easily.

However, annual fees in bilingual schools can be as much as CHF 25,000.

Most expats send their children to private schools that teach the International Baccalaureate curriculum or to international schools using their home country’s curriculum and language.

As expected, these schools charge very high fees, which can be as much as CHF 35,000 per year.

Securing a spot in these schools may be quite difficult, so it is important for expat parents to enlist their children to their desired schools ahead of time to avoid long waiting lists.

Also, as school fees can take a huge chunk of expats’ wages, it is imperative to seek the assistance of employers in covering education costs or securing school places.

Healthcare has always been one of the main priorities of the Swiss government, which makes the country one of the best providers of healthcare in Europe.

However, unlike the UK with its largely free state system and the US, which requires employer-sponsored healthcare plans, Switzerland makes it compulsory for all residents to acquire private health insurance, making this a major financial burden for expats – roughly 10% of the average Swiss salary.

On the upside, private health insurance providers are legally obliged to accept health insurance applications of all individuals living in Switzerland, regardless of their medical condition.

The average cost for healthcare is around CHF 450 a month, although you can find health insurance packages for less.

Low-cost insurance plans, however, can quickly leave you with a bill you weren’t expecting to pay.

The premiums are not based on wages but by geography or canton and the overall cost of healthcare for the entire population in each canton.

With this in mind, the premiums that expats pay in the three main cities are more costly than those paid for by individuals in rural areas in Switzerland.

Expats with an active social life and/or up for adventure will find that Switzerland just suits their needs, with an abundant nightlife typical of European cities, the Alps just a train ride from the urban centres, and festivities materialising along city streets all year round, such as the Geneva Festival and the Street Parade in Zürich.

Going out on a date can be relatively expensive.

For example, you might have to spend at least CHF 100 for a dinner for two in a mid-range restaurant. 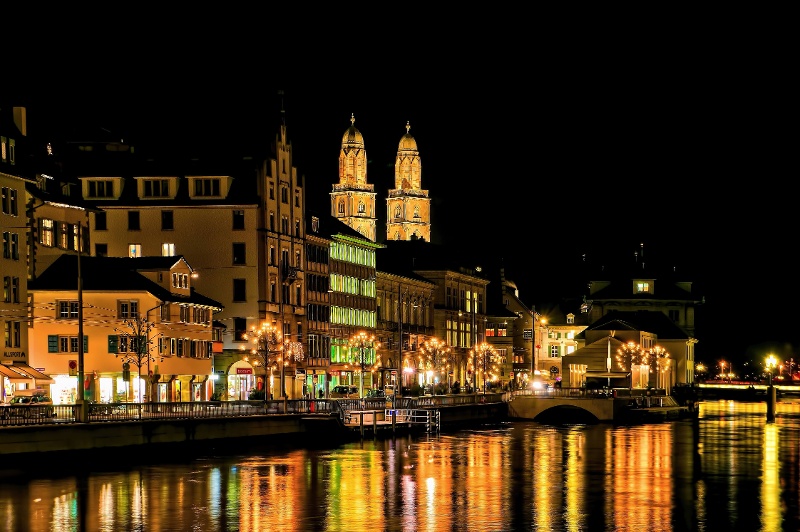 Meanwhile, a ticket for two to the cinema can easily cost CHF 40. It is also important to note that value added tax in the country is about 8%.

For culture geeks and art buffs, a trip to the Swiss National Museum in Zürich and Musée d'Art et d'Histoire in Geneva is an absolute must.

Fans of Witz, Rembrandt and Rodin will be thrilled to know that they can see some of the greatest art pieces in history for CHF 10 or less.

Opera and musical lovers will also not starve for entertainment as the Zürich Opera House, considered to be one of the best in the country, showcases the best performances for around CHF 30 (prices subject to change according to performance and seating).

Scenes of calm and quiet neighbourhoods, a train ride to the Alps and picturesque views of Swiss lakes are all very appealing and would be good enough reasons to pack your bags and move to the land of all good things.

But then again, it is not always as easy as it sounds, as living an expat life in Switzerland can still put a lot of stress on your finances.

It may seem affordable because of the high wages and because the high cost of living may appear nothing but compensation to getting your money’s worth.

However, expats are also subject to income and withholding tax and may have to consider the financial aspects they disregard in their home country.

The best way to go is to develop your own expertise, evaluate your finances, and anticipate all possibilities, good and bad, before making a decision.

So if you’re considering a move to Switzerland, make sure you have a financial plan in place.

Since we help expat investors around the world…

Feel free to get in touch if you need any help.