What I'm reading #33: the best stories of the week

I hosted a talk by best-selling author Morgan Housel.

I am a huge fan and in awe of his communication skills.

Here’s what I learned from him, and more.

Morgan spoke about what happens in our heads when we think about greed, fear and risk.

You can’t find the answers in a finance textbook.

The only way to wrap your head around behavioural finance is through stories.

Which is why he shares four that have nothing to do with investing at all but have clear takeaways about how investors can think about money.

This is the first, where he opens on the Wright brothers. Time is an important concept is investing.

The longer you’re in the markets, the better your returns will be.

But have you ever thought about the cost of delay?

And how expensive your hesitation may be?

Stuart Ritchie’s latest blog reveals one investor’s 4-month delay and how it cost him over £600,000 in growth.

I hope it makes you think…

Are you waiting to invest or make that move towards a better future?

If you’re already well on your way, the next question may be around when to review your investments.

Money Week says now is a good time to do that.

It can feel like a chore, depending on your fondness for admin.

But it’s something everyone should do at least once a year.

August tends to be a quiet month.

People are back from summer leave and preparing for Q4.

You could spend time getting your finances in order and reassessing your goals.

And if you want a second opinion, by the way, Stuart and his team are happy to help.

In it, he says a big lesson from history is how chance encounters lead to both magic and mayhem in ways that would have been impossible to predict.

He then goes on to show how history hung by a thread three times.

As Morgan so eloquently does, he weaves stories into financial ideas so people can better understand how they behave with money.

The world is unpredictable and fragile to chance so Morgan suggests you keep two things in mind:

Daniel Kahneman won the Nobel Prize for economics despite never taking an economics course in college.

Kahneman is a psychologist whose discoveries laid the foundation for the new science of behavioural economics.

One of his most important findings is that loss feels twice as painful to us as gain feels good, so the emotional scales aren’t balanced when we make economic decisions.

Now Kahneman has issued a new book on flaws in human decision-making titled Noise: A Flaw in Human Judgment.

Results reveal a gaping hole in expert judgement, yet it usually goes unseen and uncorrected.

This statistical approach isn’t our natural way of thinking. It takes time, effort and training. Yet it tends to reveal thousands of errors that don’t cancel one another out.

Rather, the mistakes add up.

Turning this to investment, how much of your financial decisions are driven by evidence and data?

And how much is governed by emotions and prediction?

To end, here’s a Carl Richards illustration summing up my previous point. 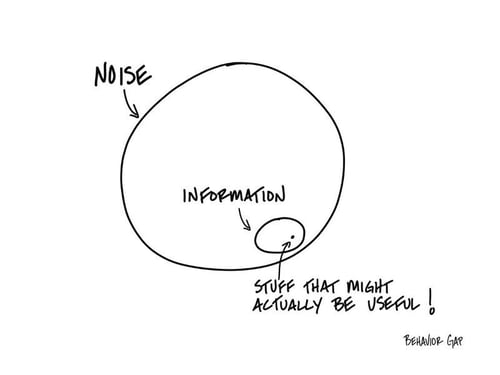 What are you paying attention to? What can you ignore?

“Everybody gets so much information all day long that they lose their common sense.”
- Gertrude Stein

“The purpose of information is not knowledge. It is being able to take the right action.”
- Peter F. Drucker

If you liked this post, please share it using the social buttons at the top, or just forward them this blog.

Have a great weekend and enjoy the ‘light’ reading!

Sam Instone's video with Morgan Housel 'The psychology of money'

Morgan Housel's 'Hanging By A Thread'