What I'm reading #45: Consider what you don't see

Reminded me of a lesson from WW II.

About planes that did and didn’t survive enemy fire…

And a bias that dupes us all (including investors). 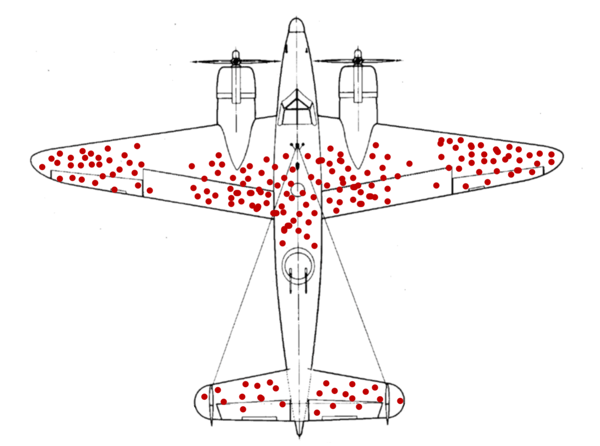 Consider what you don’t see

This week I am drafting my regular column for The National about ‘the psychology of money.’

It’s about decision-making and begins with a story.

World War II was hanging in the balance.

The American Air Force was suffering badly from the German air defence.

Too many of their planes were going down to enemy fire.

They researched the returning planes, and found they were receiving most bullet holes to the wings and tail.

The engine was spared.

“Wings and tail are vulnerable to receiving bullets. We need to increase armour to these areas.”

A mathematician in their team, Abraham Wald, didn’t agree.

He believed the Air Force’s analysis was missing a valuable part of the picture – the planes that were hit but hadn’t made it back.

“Don't armour the wings and tail. Armour the engine. Those are the planes that have not survived, and thus not available for research.”

The American Air Force suffered over 88,000 casualties during the War.

Without Wald’s advice, this would’ve been far higher.

The human tendency to focus on survivors or successful outcomes.

It’s easy to fall into this trap.

After any process that leaves behind survivors, the non-survivors are often destroyed or removed from your view.

A classic case of “out of sight, out of mind”.

If failures become invisible, then naturally you pay more attention to successes.

You can’t see all those failures because when they fail, they also disappear.

You’re left with only successes…

And seeing these, day after day, might inspire you to leave the comfort of a corporate career to enjoy the thrill, excitement, and growth of a start-up.

In my own work of maximising the returns on the capital our clients entrust us with survivorship bias is the tendency to view the performance of existing stocks or funds in the market as a representative comprehensive sample, without regarding those that have gone bust.

Overestimation of historical performance and general attributes of a fund or market index.

Survivorship bias risk is the chance of an investor making a misguided investment decision, based on published investment fund return data.

Making decisions based upon the wrong facts.

Survivorship bias can lead us to overly optimistic beliefs because failures are ignored, as they are not as visible as successes.

It can also lead us to the false belief that the successes within a group have some special properties, rather than just coincidence.

And that is what pulls us towards best-selling diet gurus, celebrity CEOs, superstar stock pickers and get-rich-quick/crypto traders.

You look to the successful for clues about how to better live your life, and about how you too can survive similar forces against which you too struggle.

The problem here is that you rarely take away advice on what ‘not’ to do and on what you should avoid.

And that’s because most of them don’t know.

Information like that is lost along with those who don’t make it out of bad situations or who do not make it to magazine covers.

So, how do you avoid being duped by survivorship bias?

Most of the time, success is all about avoiding large catastrophic failures while absorbing small, manageable damage.

Without doubt, helping my clients avoid costly mistakes is part of the peace of mind and value that comes with professional advice.

So, take your blinders off and consider what you don’t see.

That could be your life saver.

If you find this area interesting try this Ted Talk:  Missing what's missing - How survivorship bias skews our perception

What should you consider that you don't currently see?

"The so-called lessons of history are for the most part the rationalisations of the victors. History is written by the survivors."- Max Lerner