What I'm reading #51: The map is not the territory

The British Army was big on maps.

Before GPS, I spent A LOT of time learning back bearings, grid references and ways to make sure we were in the right place at the right time…

But a map of reality is not reality.

Even the best maps are imperfect.

This has hugely important lessons for your life journey.

I hate to shatter your childhood misconception, but…

To illustrate this, let’s start with your thoughts about a map of the whole world rather than the Ordinance Survey map I waterproofed with laminate.

The image you’re picturing most likely resembles the Mercator projection.

In 1569, the great cartographer, Gerardus Mercator, created a revolutionary new map based on an impossible task of making a 2D representation of the 3D/cylindrical world.

The new map was well-suited to nautical navigation since every line on the sphere is a constant course, or ‘loxodrome’.

The vast majority of us aren’t using paper maps to chart our course across the ocean anymore, so critics argue the continued use of this style of map gives users a warped sense of the true size of countries—particularly in the case of the entire African continent.

Visually speaking, Canada and Russia appear to take up approximately 25% of the Earth’s surface, when in reality they occupy a mere 5%!!! 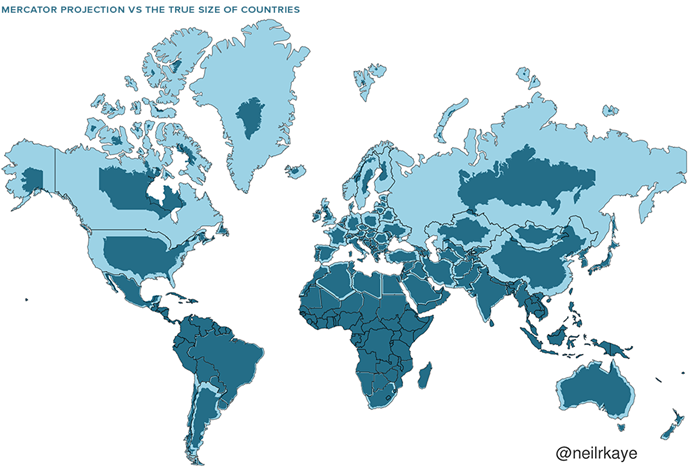 Russia is nothing like as big in reality as it is in your head.

And neither are Canada or Greenland…

Despite these spectacular inaccurate visual features—or perhaps because of them—the Mercator projection has achieved widespread adoption around the world.

This includes in the classroom, where young minds are first learning about geography and forming lifelong opinions on the relationships between countries.

Even the best maps are imperfect.

That’s because they are reductions of what they represent.

A map can also be a snapshot of a point in time, representing something that no longer exists.

Images, thoughts, mental maps and opinions we have in our mind also don’t represent reality but rather our interpretation of it.

What distortions exist in your own mental maps?

This is important to keep in mind as we all think through problems and make better decisions.