If you wanted to buy a handful of stocks, which would you pick?

I’ve been asking people that question for more than 20 years. Most people say,

But after a period of great returns, fast-growing businesses can become lousy stocks…sometimes for a decade.

I can hear what you’re thinking.

If a company continues to earn record business profits, that won’t happen.

Nobody can forecast what businesses will keep earning record profits.

Second, even if we could see a business’ future, that isn’t the key to how its stock will perform.

This is why legendary money manager Kenneth Fisher calls the stock market, “The Great Humiliator”.

Fisher’s words might be painful or prophetic if you bought a popular tech stock last year.

Those are painful kicks to the crotch, despite those companies earning record business profits.

Below is a graph showing the stock performance YTD of the following businesses: 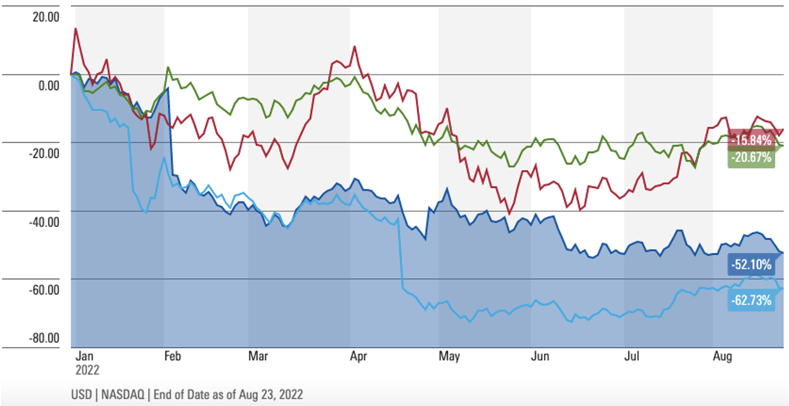 The company’s net business income almost doubled from 2020 to 2021.

And according to revenue generated during the first two quarters of 2022, Netflix is estimated to earn even higher profits in 2022.

Similar stories of record profitability can be told for Facebook (Meta), Tesla and Google.

But as shown above, their stocks sank too.

Here’s a chilly example of what could happen.

In 1999, I bought that stock, along (it seemed) with almost everybody else.

After the year 2000, Intel’s business profits continued to increase as home computers became as common as toasters.

Intel’s chips were in most PCs.

Those little chips were in Apple’s computers, too.

No, this wasn’t an aberration.

The same thing happened to most of the world’s fastest-growing (in terms of business earnings) blue-chip technology stocks.

But their stocks sank.

Savvy stock buyers know that it takes more than rising business profits and an exciting story to make a stock keep rising.

Instead, there are three main influences:

From 2000-2014, the company continued to earn record business profits.

But analysts and investors had expectations that the company couldn’t meet (#2).

And because, from 1990-2000, the stock had risen far faster than its business earnings (#3), the chickens eventually came home to roost.

Let’s bring this back to today.

What’s more, over the past decade, their stocks also rose far faster than their business earnings.

That doesn’t mean your favourite technology stocks will continue to sink or languish for a decade.

But do you know which? Nobody does.

That’s why, instead, you should invest in a diversified portfolio of index funds.

If you’re going to hand-pick stocks that you think will do well, always remember…

The stock market really is The Great Humiliator.