At least, that’s what we thought.

Gilder described a new paradigm that promised to change the world and commerce in magnitudes akin to the printing press, air travel, the telephone and electricity.

We hung on every word of the Gilder Technology Report, which he created in 1996.

It included impressive research and technical explanations that predicted much of what came to be.

The report’s back page, however, was what we clamored for every month.

It included a list of game-changing stocks: “telecosmic” companies that embraced what he called, the “ascendant” telecom technologies.

We shoveled his stocks into our investment club portfolio and we soon made a fortune.

He liked stocks like Globalstar, a company that offered satellite communications systems.

With a Globalstar phone, you didn’t have to worry about wonky inconsistent reception from cell towers.

With Globalstar’s direct satellite linkage (the first of its kind) people could call their loved ones from the North Pole or the depths of The Grand Canyon.

Gilder also recommended Optibase, a company with video streaming technology. It was Netflix before Netflix. This was going to revolutionize the way we watch movies.

It lay underwater fiber optics cable which connected the planet to WiFi.

In so many ways, Gilder was right.

And the stocks he recommended hit stratospheric heights.

My friend, Grant, allocated about 80 percent of his personal portfolio to Gilder’s stocks.

We watched in amazement as Grant quadrupled his money in less than one year.

“These technologies are changing, and will continue to change the world.”

And Gilder was right…until he wasn’t.

Investors who bought them in 2000 would have needed to gain 800 percent from the low in 2002, just to break even. And that gain never came.

Optibase (Netflix before Netflix) couldn’t gain traction so it went into property investments.

But let’s back up to that pre-crash wave.

If Gilder was God, these were the Apostles.

Yet we were visionaries.

We knew business profits might not come right away.

But as visionaries, we believed the analysts.

The future, at the time, looked so darn obvious.

And because our stock prices soared, we thought we (and “the experts”) were right. Plenty of mutual funds filled with Gilder-like stocks.

At least, that’s what we thought.

Unfortunately, something else was happening.

Historically, whenever a new technology serves to disrupt life or business, it draws curiosity and projections about the future. That entices people to speculate. When demand for such shares increases, more investors jump on board.

Others, who then see share prices rise, toss their money into the race. Then FOMO (Fear Of Missing Out) causes a stampede of buyers.

Historically, this results in bubbles and subsequent crashes.

Carlota Perez outlines this well in the Cambridge Journal of Economics: The Double Bubble at the Turn of the Century, technological roots and structural imperfections.

The challenge is four-fold:

2. Find a business in that niche that is making profits now or will very soon.

3. Predict a durable competitive advantage for that business to fight off competition.

4. Buy that business at the right price.

Some of those businesses were great.

But investors paid too much for them. It took 15 years for the fund to eclipse its 2000 level.

This is common with high-flying funds. 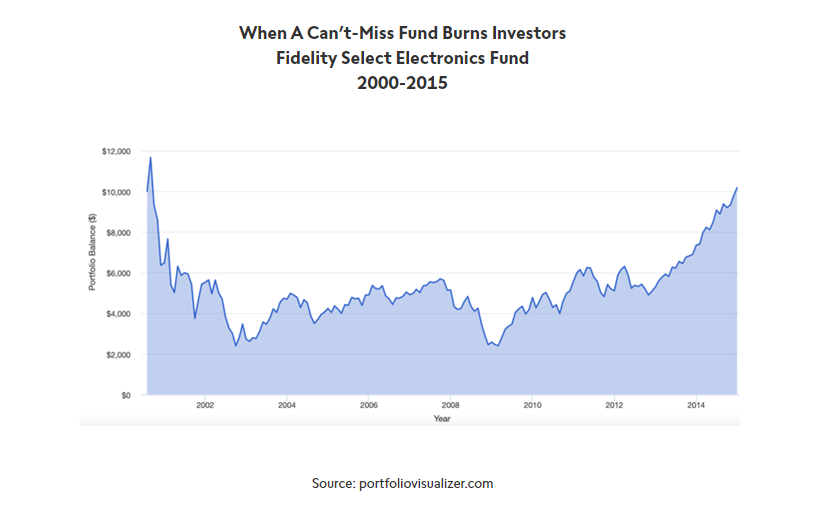 She excited a new generation of investors with another paradigm. She’s responsible for the investment decisions at ARK Invest.

Like Gilder and the tech-minded apostles of the past, she doesn’t concern herself with businesses that make profits now. Instead, she picks companies that she hopes will make profits later.

And the stocks in her fund have soared on the excitement.

Over the five years ending December 28, 2020, her ARK Innovation fund gained 599 percent. In 2020, it gained 158 percent. Most of the fund’s holdings, however, don’t yet earn corporate profits.

This doesn’t mean the Ark funds are destined to crash.

Plenty of investors say this time is different. Umair Bilal is one of them.

The documentary filmmaker and university film instructor has been a stock market investor for the past five years.

“We have not seen the type of innovation happening as of late for more than a century. The last time that we saw a similar convergence of technology was in late 1800s with the advent of telecommunication, telephone and [the] internal combustion engine, which transformed the world entirely and seeped into every sector.”

“I have done a lot of research into Cathie Wood,” she says,

“and I like her vision, as well as a strategy that is very much embracing …what tomorrow will look like, as opposed to purely focusing on near term gains.”

Umair Bilal and Elizabeth Meffen say they expect to earn at least 20 percent a year over the next ten years.

As for me, this all feels a lot like déjà vu.

I’ll watch with fascination and stick to my portfolio of low-cost index funds.