Over a period of 35 years, index fund investors earn 100 percent more money than those who buy actively managed funds

Aliens from the planet Tranquillo, hovered their saucer over a giant investment conference.

While taking over the conference, they corralled the index fund investors to one side of the auditorium.

They moved those who invest in actively managed funds to the other side.Their aim was to dissect the brains of the investors to see their differences.

If they beat index funds over one time period, they typically underperform their benchmark indexes (often dramatically, as shown here) over the next time period.

The aliens, however, were more interested in how passive and active investors think.

Here’s what they learned from those creepy, live dissections:

After all, Morningstar found similar findings without breaking skulls.

The impact of fees

Below, you can see a chart.

It shows the performance of Vanguard’s S&P 500 index of US stocks (in purple) compared to the average surviving US Large-Cap stock market fund (in yellow).

That amounts to a difference of 1.3 percent per year.

On aggregate, actively managed funds underperform by an amount equivalent to the fees they charge.

The impact of behaviour

Most index fund investors subscribe to the idea that neither they nor anyone else, can see the future.

They choose to own diversified portfolios representing the world’s stock market at the lowest possible cost.

They hire professionals (who manage actively managed funds) to cleverly trade on their behalf.

Because they believe they can hire someone who can earn better returns than index funds, they also tend to believe investment professionals can have “hot” or “cold” hands.

In other words, they are more apt to move from fund to fund.

More of them also tend to believe that market timing works.

Morningstar measures how investors behave in their Mind The Gap, Passive versus Active Edition Analysis.

I’ve replicated their figures in 11 categories below.

For example, people who invested in US Large Growth actively managed funds underperformed the returns of the funds they owned by 3.30 percent per year over the 10-year period ending March 31, 2018.

Such speculation meant they underperformed the very funds they owned by 3.30 percent per year.

The cranial culprits were fear, greed, and a lack of understanding that staying the course is the best route to take.

But they speculate less.

As a result, investors in Large Growth index funds underperformed the funds they owned by about 1.62 percent per year.

If we equally weight the 11 categories above, index fund investors underperformed the funds they owned by 1.07 percent per year.

Actively managed fund investors, however, underperformed the funds they owned by an average of 2.88 percent per year.

So…index fund investors behaved better to the tune of 1.81 percent per year.

The impact of fees and behaviour

As a result, index fund investors would make twice as much money over 35 years.

Below I’ve shown the compound annual difference of 3.11 percent. 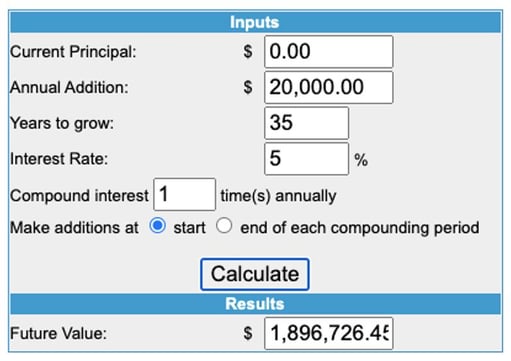 Fear, greed, under confidence and overconfidence impact most investors.