Sitting on cash during a bear market? Here's what to do

This bear market differs from others in recent history.

So what should you consider if you have extra cash to invest?

On 20th May, the S&P 500 fell into bear market territory, dropping 20% from its early January all-time high.

Many investors will want to know if the worst of the stock and bond market decline over.

It's dangerous to compare previous bear markets - as each will ride it's own path:

But what do all the above have in common?

Firstly, for each, one big thing happened.

Secondly, the Fed helped by lowering rates and putting money into the system.

This time, there are a lot of things at play.

Russia and Ukraine are affecting energy prices and the supply chain. Lockdowns are reoccurring throughout parts of the world that are very important for production. Low unemployment and significant inflation, causing the Fed to increase rates.

Unlike the previous 4 bear markets, this time the Fed is concerned about an economy that's too strong, unemployment’s heading too low, inflation’s heading too high.

As for when the bear market is over, it’s impossible to tell, because the reason we’re seeing this volatility and uncertainty for the market is because so much is happening at once.

We know from history that anything can happen

Nobody should be making very short-term decisions based on what’s going on today.

One thing that we can be sure of is by the time we have more clarity, the market’s going to be up 20%, 30% from current levels. 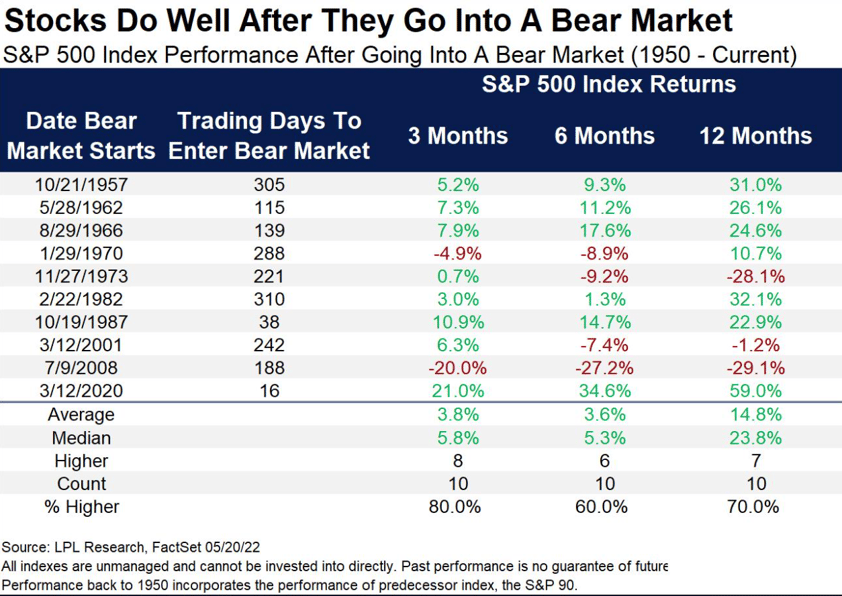 You can’t wait for clarity in order to put your money to work.

By then, it will be too late.

The one thing we know is that valuations are looking better.

The stock market’s price/earnings ratio has come down as share prices have fallen and as corporate earnings have continued to climb.

The 10-year Treasury note is now yielding almost double what it was at the beginning of the year.

So for those of you sitting at home with a lot of cash, is it safe to go back into the water?

And if so, should you dive in all at once, or wading in slowly?

I’m never a believer in cash.

Regardless of where the markets are, the data tells us that it’s better to go all in.

In fact, the odds are about 67% that you wind up ahead over somebody who dollar cost averages (gradually wades into the water).

Finally, a note on value investing

A client asked me recently, “After the last two times value had a “peak” of the factor being cheap, how did value investing do the subsequent five years?”.

No matter how you slice it, there is historical evidence of value stocks outperforming growth stocks.

In both the U.S. and developed international markets, the five-year stretch after the Internet bubble was a boon for value investors.

The U.S. outperformance was around 30% annualised for 5 years.

In international markets, the outperformance was around 23%.

If we look to 2009-2013, the results are the same. The five-year stretch after the valuation peak was another good time to be a value investor.

Not nearly as good as after the 1999 peak, but the relative outperformance was around 13% annualised in the U.S. and 8% annualised in international markets.

Of course, no one can predict the future.

But we know that in past two instances of a valuation peak in value portfolios, the next five-year stretch was a good time to be a value investor.

Value investing is based on the premise that paying less for a set of future cash flows is associated with a higher expected return.

That’s one of the most fundamental tenets of investing.

History is, however, not a perfect indicator of the future and it is difficult to time the valuation peak.

It can go on for years at a time.

Another reason to favour time in the market.