When you were a child, a parent likely told you to brush and floss your teeth.

They said it would reduce the odds of cavities.

But every once in a while, a cavity emerged.

You might have yelled, “But I brush and sometimes floss my teeth!”

But it reduces the odds that they’ll occur.

This is much like owning bond funds in your portfolio.

You were told that they reduce your portfolio’s volatility when stocks crash.

But how far your bond funds fell depended on the risk you took… whether you realised that or not.

As I wrote in those books, if inflation rears its head, anyone caught with a long-term bond market fund would get spanked really hard.

I’ll explain how this works with a look at my own investments.

But over the past 20 years, it helped to stabilise my account when stocks hit the skids.

It comprises bonds that expire within a 1-3 year period.

When a 1-year bond within the index matures, the fund provider replaces it with a new 1-year bond.

The same goes for the fund’s 3-year bonds.

As a short-term bond market index, none of the bonds within it are held longer than 3 years.

Below, I’ve pasted an image of my bond market ETF compared to the global stock market index, both measured in Canadian dollars.

In sharp contrast, anyone who owned a long-term bond market fund paid a hefty price.

But plenty of people own them.

Such investors would be stuck with past interest rates... for at least 20 years.

Because inflation and global interest rates have risen, people dumped those bonds.

Every long-term bond fund performed as bad… or worse.

Below, you can see how it performed compared to its US government short-term counterpart, which dropped just 0.45 percent last year. 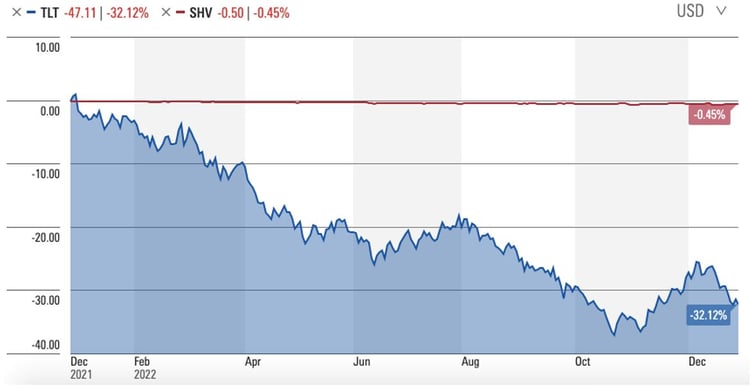 This is why I’ve always only recommended short-term and intermediate (broad) bond market funds.

If you own an intermediate bond index fund, make sure you keep it.

Yes, they fell a bit further than short-term bond funds in 2022.

But within such a fund, you’ll have bonds that expired and were replaced this year already.

Next year, another batch will be replaced, all at a higher interest rate.

That means the bond sell-off was likely overdone, much as the euphoric buy-in for high growth stocks like Tesla and Cathie Wood’s ARK Innovation funds was overdone when they soared.

Bond funds will recover, and perhaps sooner than you think.

And continue to add money to your overall portfolio.

Everything is on sale.

And that’s the best news of all.