The first half of 2022 was pretty interesting for financial markets.

It was one of the worst 6 month periods we've ever seen for stocks and bonds...

Fears over rising interest rates and the potential recessions they will bring, have seen many investment assets suffer so far this year.

An overwhelming majority of investment funds have posted losses since the start of the year with high-growth tech leading the charge downhill.

Headwinds, ranging from sky-high inflation, to rapidly rising interest rates and Russia's Ukraine invasion have sent markets into a tailspin.

US stocks slumped into bear market territory recently as the Federal Reserve hiked interest rates to try and bring down soaring inflation.

High inflation and hiking rates will inevitably lead to reduced spending from consumers, and stocks are the resulting casualty.

The only 6 month performance numbers that were worse than what we've just experienced happened during the Great Depression, 1937 crash, WWII, 1970s bear market, bursting of the dot-com bubble and 2008 crash.

Historically a -20% decline in the S&P 500 happens about once every six years and takes 370 days on average.

It only took us about 160 days to reach the -20% mark (traditionally called a bear market) from the all-time highs set on January 4th.

This is now the third bear market decline for the index over the past four years. That’s historic.

However the current decline, while very quick, doesn’t come close to cracking the top five worst market selloffs since 1929.

I maintain that stocks are without doubt the best long-term investment there is.

Bonds of all kinds ended June in the red, as the rise in yields and decline in prices seen during the first quarter rolled on.

Only at the tail end of the second quarter did the selloff abate as investors responded to economic data showing hints of a slowing in growth and an easing of inflationary pressures.

Underlying the rise in yields were big changes in expectations for Fed policy.

To start the year, investors had only expected moderate interest rate hikes from the Fed.

But during Q2 those expectations changed rapidly. In response to higher-than-expected readings in inflation, and comments from Fed officials suggesting a more aggressive response, investors took expectations for the year-end funds rate toward 3% in May, and then far above 3% by the end of the quarter.

These rising yields and expectations for a Fed moving faster and higher translated into losses across the bond market. Long-term bonds took a heavy punch thanks to their vulnerability to rising interest rates.

A 60/40 portfolio of U.S. stocks and U.S. bonds also had one of its worst 6 month stretches of all time: 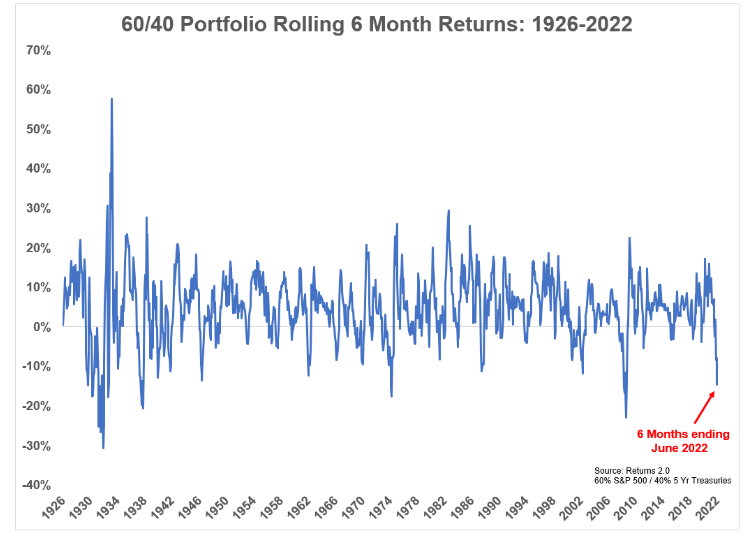 Periodically, pundits declare the death of the 60 stock/40 bond portfolio.

The above hasn't helped.

A lot is happening in the world right now (the combined pressure of inflation, interest rates and the Ukraine invasion).

This perfect storm of negative market drivers has pushed stock and bond prices down, impairing the normal diversification of risks in a balanced portfolio.

But we've been here before.

Brief, simultaneous declines in stocks and bonds are not unusual.

Viewed monthly since early 1976, the nominal total returns of both U.S. stocks and investment-grade bonds have been negative nearly 15% of the time.

Extend the time horizon, however, and joint declines have struck less frequently. Over the last 46 years, investors never encountered a three-year span of losses in both asset classes.

As the chart about from Vanguard shows, drawdowns in 60 stock/40 bond portfolios have occurred more regularly than simultaneous declines in stocks and bonds.

This is due to the far-higher volatility of stocks and their greater weight in that asset mix.

One-month total returns were negative one-third of the time over the last 46 years.

The one-year returns of such portfolios were negative about 14% of the time, or once every seven years or so, on average.

This isn't the first time the 60/40 and the markets in general have faced difficulties—and it won't be the last.

In our view, 60/40 is a sound benchmark for an investment strategy designed to pursue moderate growth.

A word on Crypto

As bad as the period was for stock and bond investors, it was much worse in the cryptocurrency market.

The price of Bitcoin, the first cryptocurrency and the largest by market size, fell 56.5% in Q2.

Though cryptocurrencies have been highly volatile for their entire history, losses of this size have never been seen for any quarter since the first Bitcoin began trading in 2014.

The price of Ethereum, the second-largest cryptocurrency by market cap, tumbled 67.5%.

6 months is not a long time

Let's all remember, 6 months is a short period of time in the grand scheme of things.

If 6 months is going to make or break your investment plan, it wasn’t a very good plan to begin with.

Your plan and portfolio need to be ready for a recession, which is always coming.

If you’ve only been investing for a short time, this is a good initiation into the way markets work sometimes.

Lots of people think bull markets are how you get rich but true wealth is built during bear markets.

And if you’ve been invested for the past 5-10 years or more the gains you’ve made (assuming you stayed invested) have more than made up for the current losses.

But experienced investors know that markets don't always go up.

I feel strongly that investing in the midst of awful stock and bond returns will be a good idea over the long run.

You cannot earn decent long-term returns without experiencing periods of painful losses from time to time.

I'm excited for my clients to be putting new money to work at much lower prices.

To use an F1 analogy:

Remain calm, keep your eyes on the road, and allow your planner to help you navigate the turns effectively at those fast speeds.

Take it one lap at a time and focus solely on what’s in front of you.