3 ways this recession is different

The US economy, the world’s biggest, is in a ‘technical’ recession.

But if the indicators of a possible recession feel very different from the last major one (2008-09 global financial crisis), that’s because they are.

Here are three reasons this time is different:

At 8.5%, the US inflation rate is close to a four-decade high.

Surprisingly, the inflation rate was negative for most of 2009, meaning consumer prices were actually decreasing.

High inflation is a problem that seems like it can only be corrected by a recession.

The other side of inflation is employment rates.

The US job market is performing strongly, with the unemployment rate at just 3.5%, nearly a five-decade low.

During the global financial crash, unemployment more than doubled, eventually hitting 10% in 2009 and staying as high as 8% even as late as January 2013.

Both recessions experienced shortages, but of very different things.

During 2008-2009, the world was troubled by a shortage of money – customers were struggling, banks were under significant pressure, and some governments couldn’t meet their financial obligations.

Today, there’s a shortage of actual things that people and businesses need – from semiconductors to energy.

What a recession means for investors

We could fall into an ‘official’ recession while the stock market hits all-time highs.

Or we could see the stock market fall even if the economy improves.

During his life, he’s shared a lot of investing wisdom, including on recessions…

“Bad news is an investor's best friend. It lets you buy a slice of the future at a marked-down price.”

Because recessions are announced with a delay, rather than in real time, markets are often on the way toward recovery by the time the headlines hit the news.

For two-thirds of recessions since 1980, the stock market had already bottomed out prior to the announcement month.

In 2020’s recession, for example, the market’s low point came in March, three months before the announcement in June.

Reducing your exposure to stocks if and when a recession is declared may likely mean you miss out on the brighter days ahead.

Cyclicality is part of the market, and the stock market tends to trend upwards over the long term.

Our ability to track share prices so closely in today’s world comes at a cost: it can lull you into a false sense of optimism when you see share prices that have risen consecutively for days/weeks/months in a row, or into panic if the reverse happens.

How a stock performed in the last week doesn’t tell you anything about how it will perform in the next few days, months, or years.

No one knows the future, and even the experts generally have a poor track record at predicting the market.

That’s why Buffett thinks dipping in and out of investing based on “the turn of tarot cards, the predictions of ‘experts’, or the ebb and flow of the economy and business activity” is one of the biggest mistakes we can make as investors.

After all, if you just missed the best 10 days of the market between 2001 and 2020, (7300 days in total) your portfolio would have made less than half of what you’d have made if you never withdrew at all.

Our primal fear of losing money makes us all extremely skittish about bad economic news. However, Buffet's words and the key saying that titles the picture below are well worth bearing in mind. Simple to say, but not easy to do. 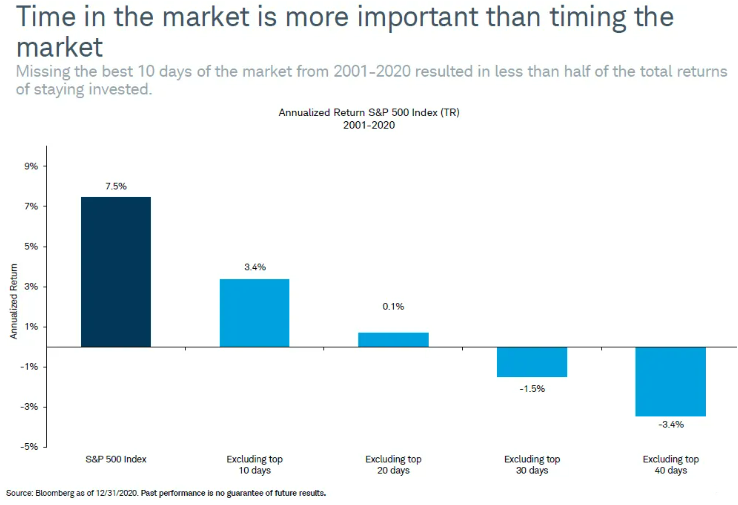 How to live longer and happier with this financial planning secret

What I'm reading #34: Business, relationships and life - 45 years' worth of lessons

What I'm reading #31: Wealth vs. getting wealthier