If you fold a piece of paper 103 times it will be as thick as the entire universe?

Think about that for a second.

It's incomprehensible, isn't it?

And it can do more for your money than you'll ever be able to on your own...

When I was at university, a BBC interviewer asked me whether students think about pensions.

“Students have more pressing things to think about than retiring.”

Tuition fees, student loans, studying and future job prospects all ranked higher than a pension I wouldn’t need for decades.

Retirement seemed a long way off at 19.

If I could go back in time and tell myself anything, I would use the words of Tony Robbins, from his great book Unshakeable: Your Guide to Financial Freedom:

“You’re never going to earn your way to financial freedom."

Instead, compound interest is the eighth wonder of the world because:

The impact of impatience

Some people try to shortcut this process.

They don’t invest – they speculate.

In effect, they gamble their money in emotionally driven investments like houses, active funds, shares, and products sold to them by banks and brokers.

Even into their 40s and 50s, they think retirement is a distance away.

People in both these camps have one thing in common.

They hope things will work out for them.

Hoping is why 95% of people live below their preferred standard in retirement.

All hope is not lost

Remember the exponential growth I explained in the beginning?

The average paper thickness is 1/10th of a millimetre.

If you perfectly fold the paper in half, you will double its thickness.

Folding the paper in half a third time will get you about the thickness of a nail.

Seven folds will be about the thickness of a 128-page notebook.

10 folds and the paper will be about the width of a hand.

Do you see where I'm going with this? 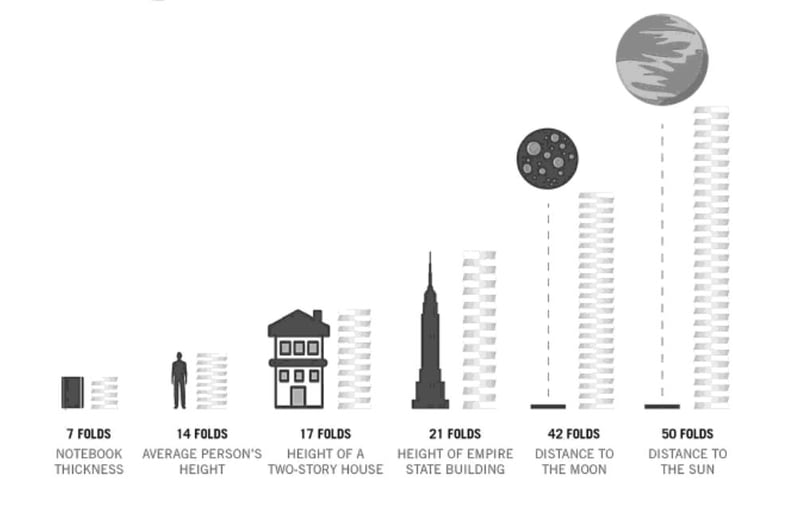 No matter how old or young you are…

Used right, the power of compounding can be your greatest route to wealth – whether you’re 19, 39 or even 59.

However, as the American economist Burton Malkiel said:

“The majority of investors fail to take full advantage of the incredible power of compounding – the multiplying power of growth times growth.”

Because most people don’t know how amazing compounding truly is.

So, allow me to illustrate with an example…

A tale of two investors

They each decide to invest £500 a month.

Will is resourceful and starts investing at 19.

However, he only saves for eight years, then stops.

After eight years, his investment is worth £72,277.88 – assuming it compounds at 10% a year, which is the historic rate of the US stock market over the last century.

Will's account then lies dormant, not being added to for 39 years until he turns 65.

Mike is slower off the mark.

Unlike Will, he’s consistent and disciplined.

He invests every single month until he’s 65.

Despite investing for 31 years longer than Will, because Mike lost out on those first 8 years of growth, he’s the loser with £436,599 less in his account.

By starting earlier, the compound interest Will earns on his investment adds more value to his account than he probably could have added on his own.

But what if Will hadn’t stopped investing at 27, and had carried on adding £500 a month until he was 65 too?

Some people believe they have left it too late.

But the truth is you’ll never be younger than you are today – so today is the best day to start.

For every day you wait, the power of compounding is eroded.

If you want help getting started...

Or don't want to go about planning your finances alone, get in touch.

Albert Einstein allegedly said compound interest was the most powerful force in the universe.

Whether he really said it or not, this has become my financial motto.

I strongly suggest you adopt it too.