Most investors are experiencing hefty double-digit losses. In truth, we aren’t far removed from chimpanzees

The Greek storyteller, Aesop, tells the tale of two neighbours who ask the god, Jupiter, for a bunch of cool stuff.

Jupiter knows these guys are jealous of each other.

To punish them, he grants their wishes under the premise that their neighbour will receive twice as much.

One guy asks for a room of gold.

But as a result, his neighbour gets two rooms of gold.

To see his neighbour earn twice as much drives him batty.

Jealousy and greed are part of the human condition.

In fact, research suggests that when we see someone we know achieve something great, our brains’ pain receptors often get triggered.

When it comes to money, feeling the hurt of watching our friends make more with their investments often tempts us to buy what they bought.

We then trick ourselves into believing we decided on our own.

We filter information that doesn’t align with our decision.

The Endowment Effect makes us value the decision even more.

In truth, we aren’t far removed from chimpanzees…or lemmings.

In 2020 and 2021, many people stampeded into Cathy Wood’s ARK Innovation ETFs.

They dog-piled into Bitcoin and hot tech stocks, like Shopify.

But in most cases, they didn’t buy them based on unbiased, rigorous analysis of the risks and rewards.

Instead, they bought them because other people apparently printed money with those bets.

In other words, if someone bought it in early 2021 (which many did) that money would need to gain 257 percent just to break even.

Anyone who bought in mid-November last year (of which there were plenty) would need to gain 298 percent just to break even.

Once again, many were urged by the notion that friends and colleagues were making a fortune on the stock.

But it’s down 80 percent since its peak.

Investors who bought at its crescendo (and many did) would need to gain 400 percent to break even on their money.

Globally, most investors are, so far, disappointed with 2022.

You might ask, “Where was the best place for your money?”

Stocks that are modestly priced, relative to their respective corporate business revenue, have held up well.

These are known as Value Stocks.

The dark blue line below shows its growth compared to the drop for the broader UK market. 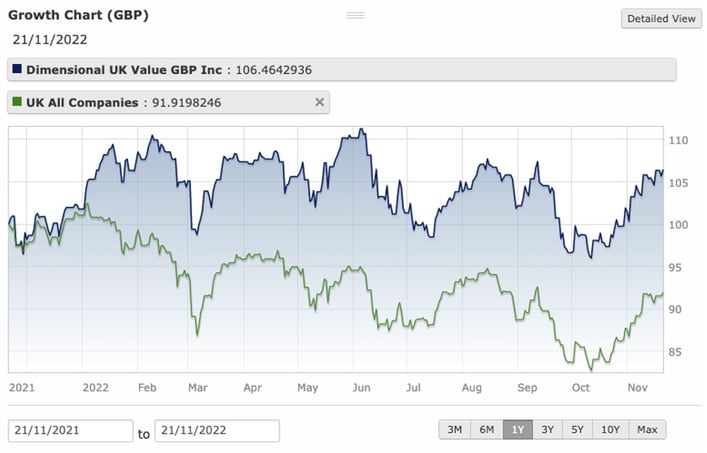 As shown below, that compares to a drop of 14.69 percent over the same time period for the S&P 500 index of US stocks. 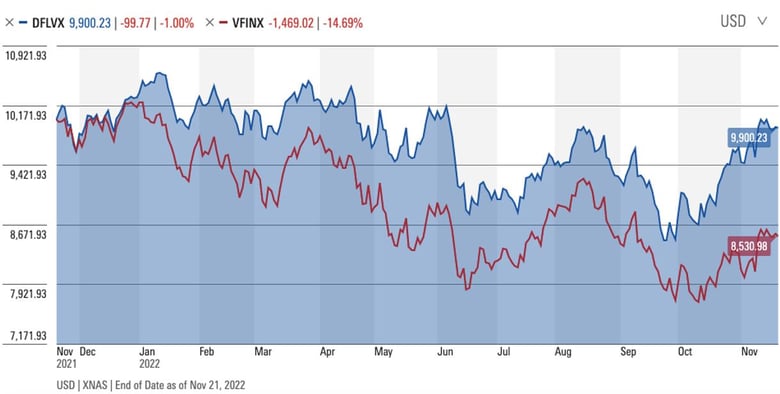 Long-term, value stocks have trounced the returns of most popular growth stocks and the broader market indexes.

I own a value stock market index.

And what if I told you that your brother-in-law owns a portfolio of value stocks?

Did I mention your cousin?

She, too, has something similar.

While most investors are experiencing hefty double-digit losses, your brother-in-law and your cousin are faring far better.

What’s more, that pesky guy you work with owns value stocks as well.

And he won’t stop talking about it.

Can you see what I’m doing?

If you knew your friends and colleagues were weathering this market storm with value stocks, you would likely want them, too.

But smart investing isn’t about chasing past returns or coveting what others own.

Instead, it’s about owning a globally diversified, low-cost portfolio.

It’s about maintaining a consistent allocation through thick and thin.

That means rebalancing as needed: selling pieces of “winners” and adding the proceeds to the “losers.”

Value stocks could be part of this plan.

If your emotional equanimity is far beyond the average person’s, you could do this on your own.

Or, you could pay someone else.

Either way, by putting investment science in your corner, you would thump the long-term returns of almost everyone you know.

And yes, Aesop would be proud… as long as you kept this quiet.