Updated for 2021: Financial loss and 4 invaluable tips for your well-being

This blog was originally written for the millions of investors who lost money to the wrong 'advisers'.

But the same advice can be given to anyone suffering financial loss.

Including business owners and employees who've been hit by the pandemic in the last 18 months.

With all the many paths to getting rich, losing your wealth can happen remarkably quickly with a single poor decision.

Money is an emotion and one of the most powerful forces in our lives.

The emotional and physical effects of a major financial loss are similar to the grief you feel over the loss of a loved one, according to Aaron Bruhn, a lecturer at Australian National University.

He found that people who lost their savings experienced:

His findings demonstrate that the emotions caused by a financial setback are not to be taken lightly.

But, that being said, it’s equally important to realise that a major investment loss doesn’t doom you to a life of depression.

We’re far more resilient than we give ourselves credit for…

…And this isn’t just empty reassurance.

Daniel Gilbert, a professor of psychology at Harvard, researched people who suffered major trauma, ranging from car crashes to war.

He found the vast majority of them returned successfully to their pre-trauma state of happiness.

And a couple of years later, a surprising number reported being happier than they were before the traumatic incident.

Journeying towards well-being: 4 tips for your brighter tomorrow

So how can you work towards a happier tomorrow?

Here are a few tips to get you started.

1. Reach out to others

Personal relationships are an enormous help in overcoming any catastrophe, according to Adam Grant, a professor at the University of Pennsylvania who’s researched emotional resilience.

The problem is that most of us have a natural tendency to withdraw from social contact when we’re feeling down.

It’s vital to fight this.

Don’t be shy about seeking out emotional support from friends and family or even from a professional counsellor.

Simply being with loved ones, or talking things over with a neutral professional, can provide you with a sense of perspective about your loss.

One is to take pride in your loss.

After all, it’s true.

Believe it or not, another useful technique is to imagine how much worse your situation could be.

Yes, you’ve suffered a financial setback, but issues such as your health and the well-being of your family are far more important.

2. Change what can be changed, accept what can’t

Exercising and eating healthily are examples of things you can control.

The market's movements, the state of the economy and their impact on your business are things outside your control.

What's important now is to remain calm as far as possible.

Try to mitigate the risks of the crisis as best you can.

Look after your physical and mental health.

Financial loss can take a strain on all areas of your life but use this as a time to take a deep look at your expenses.

Where can you cut costs?

Can you move into a smaller place or a more affordable area?

Are you paying for bills you don't need or use right now, like a gym membership or beach club access?

3. Be wary of scammers

Hundreds of boiler rooms operate within the UAE and around the world.

In the case of financial advice, if you fail to deal with a regulated firm, you are not dealing with a financial adviser but a scammer/criminal.

Be wary of being pitched for products or investment strategies right from the start.

This is an indication that your adviser may not be acting in your best interests.

Look out for rugged individuals who operate on their own as they may be a lone wolf.

Modern firms tend to operate in teams, bringing together a whole team of experts to deliver a value-added service, customised advice, support and guidance to help you achieve your goals.

Remember, people do dumb things with money. But this doesn’t make them crazy – just human.

Our three-pound brain hasn’t changed for 130,000 years, so it’s primed for survival; fight, flight or freeze with mental shortcuts that ease the cognitive loads of a decision.

Examples of these are “educated guesses” and “rules of thumb”.

In the real world, people don’t make financial decisions on a calculator. They make them at the mall, on a golf course or in a meeting room, where personal history, friendship, their own unique view of the world, ego, pride, marketing and odd incentives are scrambled together.

If you've been a victim of fraud, report it to the police and consult a lawyer.

It might be possible to recover some of what you lost through legal action.

But be realistic about your chances.

Statements that were misleading but technically true…

And exorbitant money-managing fees are morally reprehensible, but they may not be criminal in the eyes of the courts.

In many cases, attempts to recoup your losses through expensive legal remedies are an example of what professionals call the “sunk cost fallacy” – also known as throwing good money after bad.

It’s simply a recognition of reality and an important step in healing.

You can also congratulate yourself.

The complexity around international investment means many people never discover their losses until too late.

4. See this as an opportunity

A financial setback can provide you with the jolt you need to become a better investor and perhaps, ultimately, a richer one.

At the very least, it’s an opportunity to assess your financial habits and see where you can improve.

Good places to start empowering yourself are by reading:

Andrew Tobias’s The Only Investment Guide You’ll Ever Need

Matt Hall’s Odds On: The making of an Evidence-Based Investor

Then, start remedying your situation.

While your recent losses may seem devastating right now, chances are your problem is nowhere near as bad as you think.

The most obvious fix for a hole in your financial situation is to spend less and save more.

Another solution is to resolve to work longer.

Simply extending your working life by two to five years can go an enormous way to repairing today’s financial damage.

Most people find that if they combine a longer career with a bigger savings habit, they can overcome even grievous financial damage.

Perhaps the trickiest part of restoring your financial health is managing your emotions.

Many people bury their head in the sand, and ignore the evidence that things are going wrong as they slip further into the financial abyss.

Yes - time is an amazing healer, but don’t miss any opportunity to set things right.

Some people will rush to make up their losses by leaping into high-risk investments that promise big returns, fast.

It’s a sure recipe for disaster.

Others will go to the opposite extreme, parking their money in a savings account or other safe investment vehicle.

This guarantees low risk, but also locks you into low returns.

It’s also not uncommon for those who’ve faced financial loss to shy away from the markets, and instead opt for bricks and mortar believing that a tangible property they can see, feel and understand is a better investment.

However, the numerical evidence doesn’t support this belief, and a lack of diversification into an illiquid and volatile asset class, such as real estate, can lead from the frying pan into the fire.

The best solution for nearly everyone is to systematically invest.

That is, to invest according to a fixed plan, consisting of…

The right financial adviser can help you make up the ground you’ve lost. 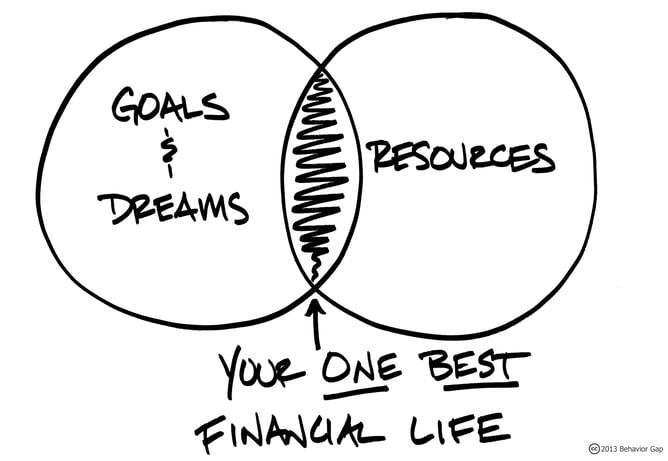 But which adviser should you choose?

Ask them how they are regulated and check what they tell you is the truth.

Request that they explain, in plain English, how they intend to manage your money.

Accredited firms will give you an Investment Policy Statement.

Make sure, too, that you understand how an adviser is being compensated.

If he says you don’t have to pay him and claims to work for free, alarm bells should sound – that means he is being compensated by the providers of the financial products he is peddling.

Reputable advisers charge a transparent fee, often based on the size of your portfolio.

Spend time interviewing various advisers and don’t be shy about asking them to point to academic work that justifies their investing approach.

With a little bit of work, you should be able to find an organisation that can not only help you deal with your financial grief…

But give you control, clarity and confidence that you are on track to a much brighter future.