The layers of the brain

The layers of the brain manifest in everyday life.

They affect our emotions.

The questions we ask.

The choices we make.

And impact our finances…

Simon Sinek talks about the layers of the brain in his famous TED talk.

He uses them to explain why people do what they do.

But how do we know anything about the brain?

From one man called Phineas Gage.

His case is widely cited as one of the first in neuroscience which allowed doctors and researchers to better understand the different areas and functions of the human brain.

Gage worked on a railroad construction crew in Vermont during the mid-1800s.

While working on creating a new rail line, a 13-pound iron rod was accidentally shot out from a planned explosion.

It went through his cheek, left eye socket, and out the top of his head.

But the left frontal cortex of his brain did not.

It’s the part of the brain that helps you make the hard decision when you take the time to think things through.

Along with the metal rod, it landed about 80 feet away. 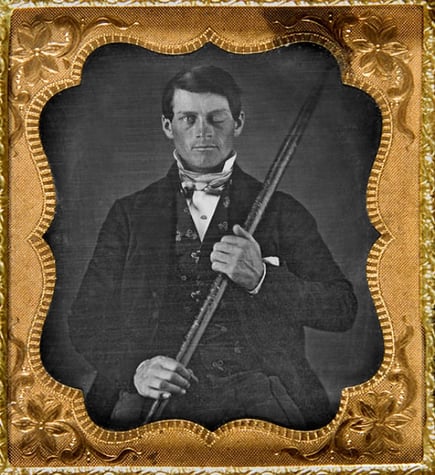 Although he survived, he was a changed man.

He became profane and impatient.

The doctor who treated him claimed;

“The equilibrium or balance, so to speak, between his intellectual faculties and animal propensities, seems to have been destroyed.”

Friends said he was “no longer Gage.”

He was unable to work so he joined the P.T. Barnum show, recently made famous by The Greatest Showman.

Then something amazing happened.

After a few years, he started getting better.

He was employed as a stagecoach driver, a job that required focus.

Many of the personality functions that were lost in the accident were taken on by the remaining cortical tissue in his brain.

Simon Sinek explains the parts of the brain as:

Or in other words,

“When we communicate from the neocortex in, people can understand vast amounts of complicated information like facts and figures. It just doesn't drive behaviour. When we can communicate from the limbic brains, we're talking directly to the part of the brain that controls behaviour, and then we allow people to rationalise it with the tangible things we say and do. This is where gut decisions come from.”

So how do these layers of the brain appear in our daily lives?

Below are 6 examples from Ben Carlson’s blog.

And how they affect your finances.

In one study, subjects were told they would be electrically shocked but would have to wait an unknown amount of time to receive it.

People hated the fact that they didn’t know when it was coming, so many actually chose to receive an even stronger shock immediately instead of waiting.

Uncertainty is the one constant in the markets. Get used to it because your brain innately fights that state.

2, Your environment can impact your actions

Robert Sapolsky details how your innate personality and environment can impact your actions in his book, Behave: The Biology of Humans at our Best and Worst:

"Fear and aggression are not inevitably intertwined - not all fear causes aggression, and not all aggression is rooted in fear. Fear typically increases aggression only in those already prone to it; among the subordinate who lack the option of expressing aggression safely, fear does the opposite."

This is like the theory that not all rich people are unpleasant but if you are unpleasant, becoming wealthy will make you even more so.

Everything is situationally dependent. Understand your own risk profile, time horizon, and personality traits so you don’t make financial decisions based on what someone else is doing.

The frontal cortex is not fully developed until people reach their mid-20s. This doesn’t excuse bad behaviour, but it does explain why most of us make some of our most irrational decisions when we are young.

Get your financial mistakes out of the way when you’re young and have an enormous amount of human capital but little in the way of financial capital.

4, It’s easier to go along with the crowd than against it

The crowd is right more than most assume in the markets but there is such a thing as reversion to the mean.

Crowd psychology matters most at the extremes.

Strong views, weakly held is a good way to approach most things.

5. Your brain needs a break from time-to-time

Like muscles, the brain can get tired from too much stimulation. This is why willpower alone is not enough to change your behaviour as self-control is a finite resource.

Overexerting yourself is how mistakes happen. Studies show that increased effort by the frontal cortex can make people less charitable, and more likely to lie because they can’t fight those urges anymore.

6. The anticipation of a reward is more important than the reward itself

Dopamine in the brain does not come from receiving a reward but rather from the anticipation of receiving it. In some ways, this is a good thing, because it keeps us alive. It helps us think about the future.

In other ways, that dopamine rush can work against us because we begin to feel entitled to something that was once one of life’s little joys. Dopamine tends to fire when something good and unexpected happens.

Becoming addicted to the feeling we receive from the dopamine hit makes us continuously feel the need to seek out the new and exciting to get a rush.

This is why we can become dissatisfied even when we achieve the goals we set out for.

The reason people love to gamble, chase fad investments, buy penny stocks or trade Dogecoin is that we crave that dopamine hit.

There’s nothing wrong with taking some chances in your portfolio but do so in moderation to keep yourself honest.

If you have been bombarded with facts and figures but what you are being offered doesn’t feel right, that’s your limbic brain.

The part of the brain that controls decision-making and feelings, like trust.

It could just save you money.