But the Dubai-based business owner knew he would make more money with a portfolio of index funds.

“With the lump sum available, I decided to take all emotions out of this investment process and invest it all at once,” he says. 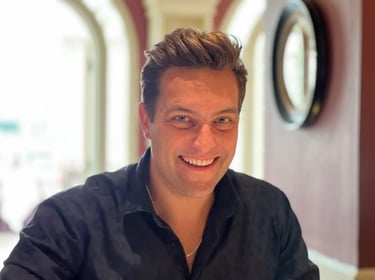 Was that the right decision?

James Joseph Doyle and Roisin White Barrett didn’t acquire a lump sum all at once.

Instead, the married 29-year-olds saved money over time.

But they kept the proceeds in a savings account.

Two years ago, they took a leap of faith to invest it all in a globally diversified portfolio of ETFs.

“We really struggled with the fear that we would be the unlucky ones to invest right before the market crashes. That was very anxiety-inducing,” says James.

Plenty of others have similar fears.

If they have a lump sum and invest it all at once, they might regret their decision if stocks fall the next week.

On the other hand, if someone adds regular sums over time, and the markets creep upward, they could be equally disappointed.

It was tempting for Simon, James and Roisin to ask whether stocks would rise or fall.

Some people ask their stockbrokers.

Others seek guidance from CNBC, The Wall Street Journal, their Auntie Pythia or a bunch of tea leaves.

Peter Lynch, the former legendary money manager for Fidelity’s Magellan Fund said, “Nobody has been right [about market forecasting] twice in a row.”

Coin flippers would have beaten most of them.

This is going to sound weird, but…to determine whether you should invest a large lump sum now, think like a rat.

Yes, there’s wisdom in those whiskers.

In Leonard Mlodinow’s book, The Drunkard’s Walk, How Randomness Rules Our Lives, the physicist describes an experiment where people and rats were required to guess whether a green light or a red light would flash.

Before participating, the rats and humans (each in separate cages) watched the flashing lights for a while.

The colour red flashed twice as often as the colour green.

Other than that, there was no pattern.

The rats and the people applied two different strategies.

The rats noticed that red was the most likely colour, so they picked it every time.

This resulted in a 75 percent success rate.

Most people, however, looked for patterns, much as we do when trying to predict the market.

Those coloured lights are much like future stock returns.

In rat-speak, they mostly flash green.

Other than that, there is no pattern.

Stocks might drop for three years in a row.

Or they might soar consecutively for eight years at a trot.

After seeing how often the green light flashed, rats would pick it every time.

That’s why, if someone had a lump sum and could think like a rat, they would invest their money as soon as they have it.

But a Vanguard case study found that investing a lump sum, as soon as you have it, usually beats dollar cost averaging.

They assumed that someone had invested a $1 million lump sum.

Every time I earn money, I invest most of it right away.

Most recently, I sold a home.

I invested all of the proceeds as soon as I had the money.

That habit applies to my book royalties, too.

They arrive as a lump sum every six months.

I do the same thing with my freelance writing income.

I don’t care, “how the markets are performing” or what some stone-faced “expert” is saying on TV.

I guess you could say I think like a rat.

Yes, it’s statistically best to invest as soon as you have the money.

Thinking like a human does not mean you should listen to predictions or make up your own.

It does mean, however, getting in touch with your emotions.

For example, if you invested a lump sum today and the markets slide another 15 percent before December, how would that make you feel?

But what if you do?

If you care too much, you might freak out.

If it frightens you enough to sell or cease adding fresh money, then you don’t have the aptitude to think like a rat.

Be honest with yourself.

If you feel you won’t sleep or you might sell in a panic, split that lump sum into several future deposits.

Perhaps you could deposit a quarter of it now.

But don’t pick a date, and then question your decision.

That, after all, will make you more like a monkey or a chimpanzee.