What will a recession do to you?

My friend's father was a builder.

Growing up, he heard about 'boom and bust' a lot.

So, perhaps it's not surprising the current debate around recession strikes a chord.

Whether or not we're in a recession - does it really matter?

And what, if anything, should you do to prepare?

There is a 100% chance that we will have a recession in the future.

But close to a 0% chance that you, I, or any 'chief economist' can accurately guess when it will start and end.

68% of yield curves are inverted.

Notable layoffs have occurred in Meta, Netflix, Tesla, Coinbase, Shopify and dozens of others.

But recent jobs reports and household surveys are solidly high.

Inflation is lower than expected and the S&P 500 jumped 2% yesterday.

Goldman Sachs even seems quite bullish...

Whether or not a recession is here, coming or waiting in the distant wings - I'm interested in the difference it really means to you.

I believe what matters more than being right or wrong about a recession is what happens in the markets (unless you lose your job, but that's another story).

Markets and recessions don't actually correlate as much as one might think.

A lot of what we experience isn’t unique.

As the saying goes,

“History doesn’t repeat itself, but it often rhymes.”

Thinking about COVID, Albert Marrin, American historian, professor of history and author, said on the frequency of pandemics:

"Flu pandemics are nothing new. Medical historians think the first one struck in 1510, infecting Asia, Africa, Europe, and the New World. Between the years 1700 and 1900, there were at least 16 pandemics, some of them killing up to 1 million people".

But humans repeat themselves in other ways across history as well.

Particularly when it comes to the markets.

That’s once every other year, as the historical averages suggest.

It shows these five corrections since 2012. 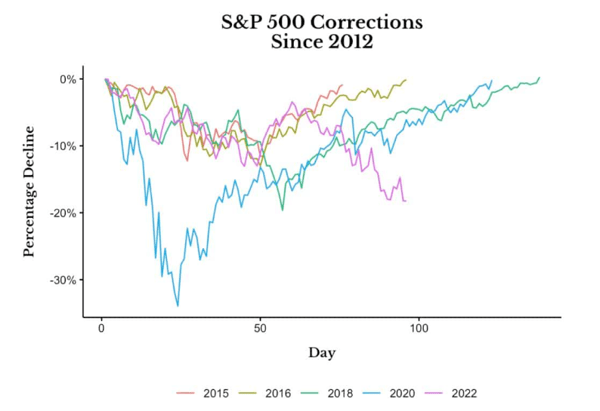 Some are saying its one of the most treacherous environments they've ever seen.

But always remember, we have data to call upon to alleviate our anxiety: 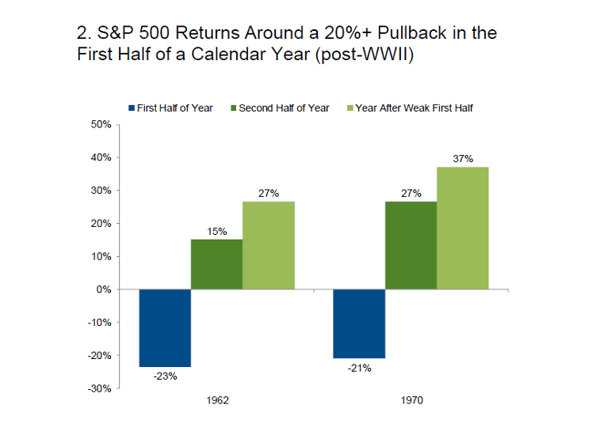 The fact remains, there is little that can be done.

Move to cash? When?

How do you get back in? And when?

Not to mention the emotions this brings.

Given what we know from history, you should expect events like this to happen.

The same goes for recessions.

You should always be ready for A recession rather than trying to get ready for THE recession.

There’s a 100% probability that we will have a recession in the future, but a 0% chance that you can guess when.

Your best choice is to take a long-term view and be in the market (as it often tells a different story).

"There is nothing new in Wall Street. There can’t be because speculation is as old as the hills. Whatever happens in the stock market today has happened before and will happen again."

You understand the risks.

I'm not going to spend time obsessing over headlines or making predictions.

I'll be enjoying summer with my family, making memories and focussing on what matters.