Expats, are you feeling prosperous in 2015?

There's an index for that!

UK expats often wonder what it's like back home. If we're living abroad in a sunny country, we like to look at the weather in the UK and see the snow and rain. We like to see the train strikes and feel good about our expat lifestyle.

But many of us will return home to the UK one day and so, what's it actually like? Luckily, we don't just have to rely on the BBC and our families back home to get an idea. The Legatum Institute has carried out exhaustive research on how prosperous people feel and published The Prosperity Index. Let's take a look at how Brits feel compared to the rest of the world.

Despite the best efforts of the BBC's latest programme, which portrays the super-rich in Britain as being the cause of stagnating wages and over-priced houses, the UK is doing pretty well and currently ranks 13th globally in the Prosperity Index, three places higher than the previous year. The study, which covers 142 countries, also found that the UK is:

The study also revealed that British people are some of the most charitable in the world and have strong social bonds. 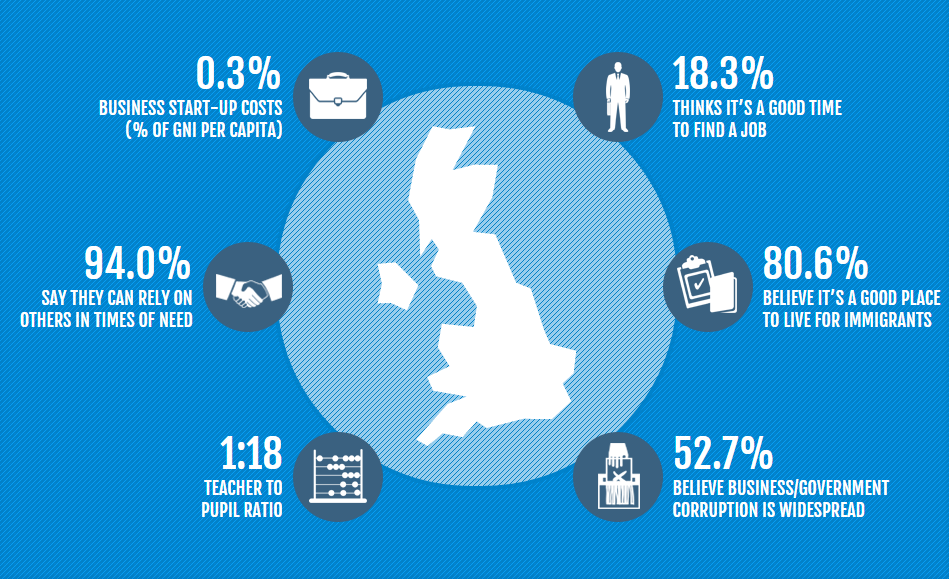 With such a strong showing for the UK in the Prosperity Index, it's perhaps no surprise that the UK and London in particular, is one of the most expensive cities in world to live in. This was covered in a previous blog on the Cost of Living in London, which formed part of our Cost of Living series. According to Mercer’s Cost of Living Survey for 2014, London ranks as the 12th most expensive city to live in. But the Prosperity Index creator's, The Legatum Institute, looked at more than just the cost of living.

Whilst the changing economic prosperity of a country had a clear impact, particularly in countries like China and the United States, the study includes a much wider set of measurements, including the core principles of Entrepreneurship and Opportunity, Education, Health, Safety and Security, Personal Freedom and Social Capital. When these were taken into consideration, Russia and Syria faired particularly badly - which is perhaps no surprise.

So back to Britain. Whilst we might get the impression that the UK is struggling (well it is January after all) the reality is that it's doing very well compared to other countries and our citizens tend to be very happy with their lot. Perhaps expats planning to return home one day won't find it quite as bad as they might think!