Bearish or bullish? Why our brains aren't hard wired to handle the vast amount of information thrown at us now

It’s easy to be pessimistic these days.

Our brains aren’t hard-wired to handle the vast amount of information we get through news alerts, emails, texts, tweets, and Facebook posts.

Anyone who's read a history book knows we have lived through much worse...

There have always been terrible things happening in the world.

But never before has it been so easy to stay on top of those terrible things.

Right now, it's easy to be labelled "bearish".

Inflation is the highest its been in four decades.

The Fed is trying to push the stock market down.

Both stocks and bonds are down double-digits from the highs.

This is the first prolonged bear market since the Great Financial Crisis: 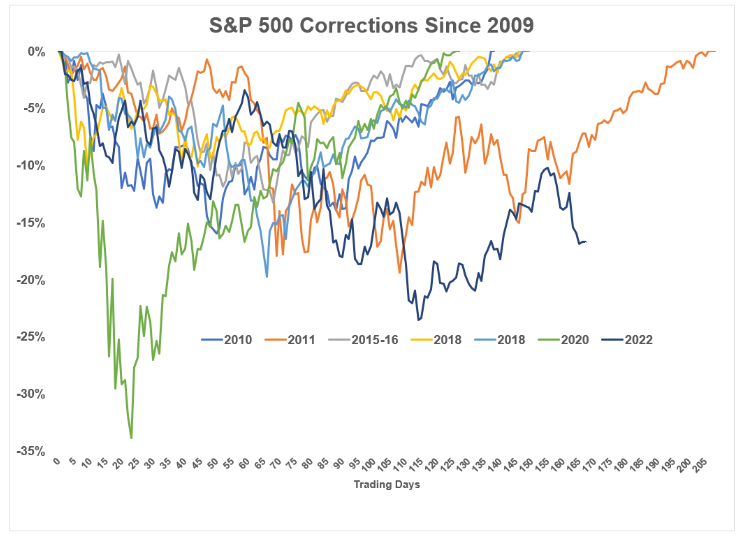 There have been a handful of corrections and bear markets since early 2009, but 2011 was the only one that came close to matching the length of this one.

There is a difference, however.

The current stock market has been heading back down yet again.

And we’re now heading into month 9 of this drawdown.

I'm not a negative person.

But it’s easy to be negative during a bear market.

(After all, the stock market wouldn’t be down if there wasn’t bad news).

I certainly wouldn't call myself bearish.

As a long-term investor, the adjectives "bullish" and "bearish" don't really apply.

I expect to see up markets, down markets, sideways markets and whatever happens in-between.

So, I'm not bullish or bearish.

They don't care about market fluctuations because they know they won't last forever.

This bear market could last longer.

Stocks could go down more.

And in most of them, 11 to be precise, the steepest losses have happened near the end, not the beginning.

If we divide each of those bear markets into 3 equal time frames, you see the market tends to falls twice as far in the third stage as in the first or second:

Or, we could see new highs in a matter of months.

There's no way to know what stage we're in now.

But successful long-term investing comes from letting go of the belief you know what’s going to happen.

Ideally, you shouldn't need the money in the near-term anyway.

And you should be comfortable with seeing the value of your portfolio go down now and again.

If you do need to spend the money in the near-term, perhaps the stock market isn't for you.

Surviving bear markets requires you to manage both volatility and your emotions.