[TRUE STORY] This brave investor lost $39,000 and still managed to get back on his feet

You're enjoying some time outdoors and huge storm clouds start to appear, threatening to burst at any second.

Instinct would kick in, you'd pack up your things and run for shelter...

The thought of running into the storm wouldn't even cross your mind.

But what if I told you, it should?

He's the best-selling author of Take the Stairs: 7 Steps to Achieving True Success and Procrastinating on Purpose.

In the podcast he explains the interesting behaviour of buffaloes and cows.

When cows see a storm approaching, they run in the opposite direction.

Unfortunately for them, they aren’t very fast so the storm catches up with them.

Eventually they land up running with the storm, prolonging the amount of time they have to endure the inclement weather.

Buffaloes, on the other hand, actually run directly toward a storm.

So, it passes over them quickly and their exposure is limited.

It's a lesson that can be applied to various areas of our lives.

In fact, it's a tough lesson one particular investor learned...

After realising he was losing $39,000 on his investment, with no solution in sight.

He reached out to my friend and colleague, Andrew Hallam, and explained his difficult decision.

He was left with two choices...

Forfeiting his investment and therefore locking in his loss of $39,000...

Or keeping the investment in the hope of possibly recovering some of the loss at some point.

The road to Hell is paved with good intentions

Mr. Smith is an expat, like many of you reading this.

He was persuaded to sign up for a 24-year term on a well-known expat savings plan.

Here’s our detailed review of the product.

In the past this was a widely used offshore savings plan, used by IFAs and big banks such as HSBC and CITI.

It may have worked for some users, but times have changed.

For many there are simply far better options available now.

No doubt Mr. Smith was persuaded to believe he was doing the right thing.

After all, he was committed to saving really hard for the long-term.

He had the best intentions to secure his financial future.

From everything Andrew Hallam says in his response to this reader’s dilemma, it seems that Mr. Smith was not made fully aware of the limitations, restrictions, risks and especially the costs of this policy.

So, with only the benefit of hindsight, Mr. Smith now realises his deposits over the first 18 months have attracted total fees.

This included fund expense ratio charges of an absolutely crippling and frankly unforgivable 9% per annum.

He was never told this when sold the policy.

How can anyone make positive returns these days when they’re facing a lag of 9%? 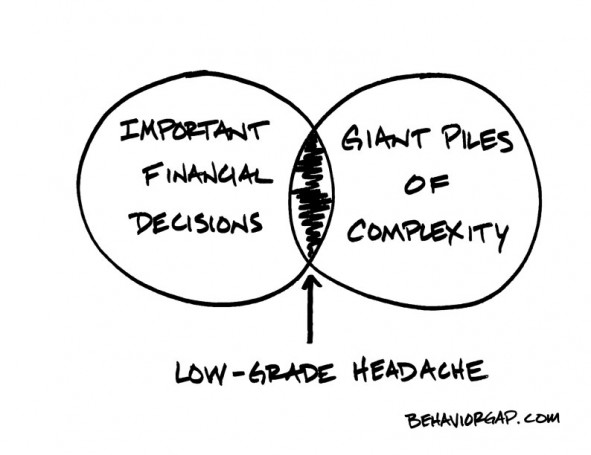 Thereafter his fees do drop, but only to about 4%.

When you average them out over the term of the entire policy, that’s about 4.5% per year every year.

That is too expensive to ever make a decent return for the investor.

It’s our view that Mr. Smith may never achieve enough growth with this plan to even match the charges, let alone beat them and make a decent profit.

In the past it may have been a different story.

The options we have available today didn't exist.

But Mr. Smith only signed up to this 18 months ago.

This plan is outdated and complex - and certainly has no place in a modern, long-term portfolio.

The point of no return

When considering his options, reviewing his contract and deciphering the complex fee structure...

Mr. Smith realised that if he cancels his policy now he won’t get a single penny back from his scheme.

The units acquired with his investment during the first 18 months have no value until 18 months are over.

In other words, the surrender value during this specific period is nil.

Those who sold the policy to him, never told him this.

Probably because they benefitted from their lack of transparency.

Between a rock and a hard place

He doesn’t feel able to walk away from the plan.

But here’s the thing - that money is gone…

If Mr. Smith cancels the policy, he loses all that he invested as his penalty for pulling out of the policy early.

What’s more, whether he cancels his policy or sticks with it by investing the minimum annual amount of $3,600, his initial $39,000 invested over the first 18 months is still effectively gone.

It’s never coming back to him.

So what's the best decision?

Does he stay with it or walk away?

It seems like there's only one real choice right?

Keep throwing good money after bad in the hope of coming out on top.

The truth is that Mr. Smith’s policy as it stands isn't good.

It’s highly unlikely to achieve growth to even match the charges.

Even if he stops paying into the plan and leaves it alone, the charging structure keeps increasing based on the agreed monthly premiums.

This means the charges are applied on every premium - whether Mr. Smith pays the premium or not.

This will wipe out any returns and the original savings if he reduces the amount or stops paying.

All things considered, Andrew Hallam says his reader should walk away from his $39,000, but could you do it?

How well do you know your investments?

It's entirely possible that yours may have been the best policy available at the time.

The circumstances surrounding your life and your goals change.

Is your investment really keeping up?

So, Mr. Smith has options to repair his financial position relatively quickly and easily.

And you have options too.

Get the clarity and confidence you need to control your financial future.

Give us a call to find out how we can help you with your investment management.

And if we can't - you'll be pointed in the right direction.