Can you time the market to maximise growth?

This week, a reader asked whether now's the time to time the market.

It’s against our nature to sit back and do nothing.

As investors, when markets are volatile, we feel compelled to react.

But this is the last thing we should do.

As an investor building wealth, we want to see results.

And we want to see them now.

The media drives this with click-bait headlines getting you to buy into the latest investment or panic about a sudden market crash.

As a financial planner who’s helped thousands of global investors, I’m constantly reminding clients of their long-term goals and how time in the market is far better than timing the market.

It's a sentiment shared by my colleague Edward Roebuck, a UK-qualified financial planner who spent time in the British military.

Below is his expertise on the topic, along with an illustrative example of how trying to time the market can cost investors dearly.

Lessons from past market crashes

2020 understandably made a lot of investors nervous.

The first market crash since 2008 saw a lot of short-term losses, after more than a decade of steady growth.

But it was also a great buying opportunity for investors who were sat in cash, while the pundits were forecasting another bear market almost every year since 2012.

Some investors missed the opportunity of the decade by predicting markets would fall further during COVID, missing most of the recovery.

In the end, some waited too long to invest and saw lower profits than if they had invested at the peak before the crash.

Because of our behavioural biases, it’s easy to end up buying high during a bull market and selling low in a bear market, caught up in the euphoria and panic.

But now we’re seeing the same investors who waited on the side-lines start to panic again because the recovery has been ‘too fast’ or because market valuations are ‘too high’.

But this fails to take the long view.

There are plenty of examples in history of where market prices seem to have climbed too high and are followed by a bear market, but these usually only take the short-term view.

In the 1980s, the MSCI World had delivered a total return greater than 350% in less than 8 years. 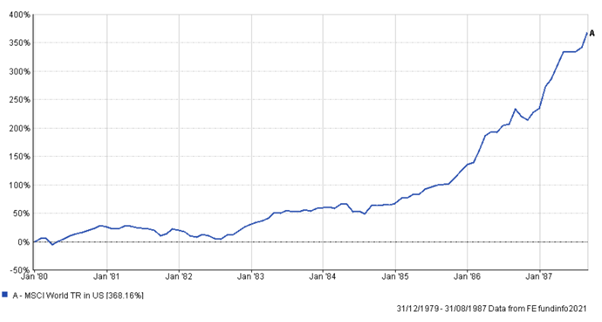 Some investors might remember this growth was followed by Black Monday, in 1987.

But here's what happened next.

The small red line on the next chart is how the 30% crash looks in hindsight.

Investors who managed to avoid panic and keep a long-term view realised the world wasn’t over, markets are volatile in the short term, and grow over the long term. 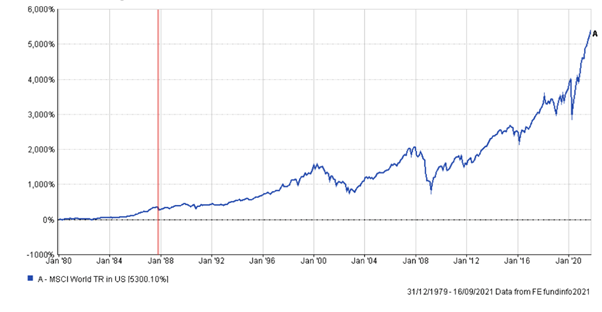 In fact, trying to move in and out of markets can have disastrous results.

If you had invested in the S&P 500 in 1990 and missed the best 25 days of market performance over 30 years, your investment would be worth 1,607% less than if you had stay invested through the period.

The results speak for themselves

James then bought back in when things recovered on 4 April 2010 but sold again on 10 September 2015 due to market volatility.

This buying and selling continues through the market growth of 2016, the 20% correction of November 2018 and the start of the pandemic in February 2020.

While James had some luck and managed to void some losses, he also missed out on a lot of the gains, costing him £600,000 in returns.

Like Aesop’s famous fable ‘The tortoise and the hare’, a slow and steady approach ultimately wins the race.

The real cost of timing the market

One of the biggest risks of trying to time the market is being out of it when an unexpected rise takes place.

Losing out on periods of growth.

Often these days happen immediately after a correction.

Meaning that by staying invested, you have the best opportunity to capture growth over the long term.

As I mentioned, your view should be time in the market, rather than timing the market.

Even missing out on 5 ‘best days’, could nearly chop your investment in half. 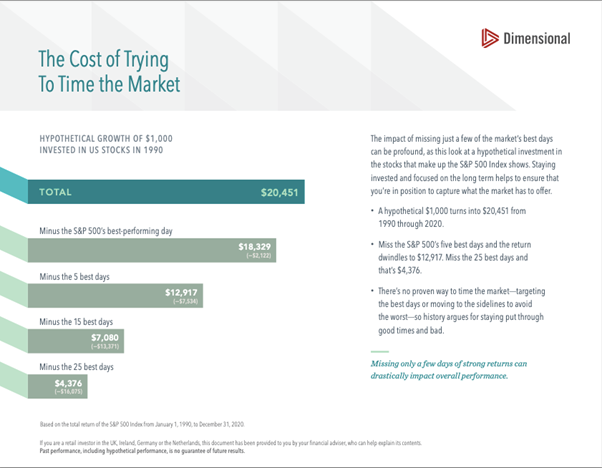 Market timing is a pure gamble, summed up beautifully by Matt Hall in his book, Odds On…

“Most investors try to pick the right investments and time the market’s moves, but their chances of winning are as slim as their chance of beating the house when they walk into a casino. The deck is stacked against them.”

No one knows what the markets will do, which means market timing doesn’t work.

It also means you miss out on the power of compounding which needs time to work its magic.

Remember, Warren Buffett made 99% of his fortune after turning 52.

(Despite investing from a very young age).

Maximising growth comes down to patience, time and compounding.