And achieve their life’s ambitions.

But most clients also want something else.

Something just as important.

And it directly impacts returns…

Many of us know that focussing on recent performance isn’t a good use of time.

Because constant checking of performance is stressful.

It can lead to unhappiness.

And the changes being made can even end up reducing your returns.

Most clients want to feel less anxiety about their money...

To reduce worry, frustration and drudgery.

Most of the stress we see comes from something completely unnecessary…

Checking your investments too often

I used to as well.

But after years of reading about the evidence and statistics...

I’ve realised just how much precious time I wasted.

And with time being a limited resource for high-performance executives...

It gives us more reason to spend it wisely. 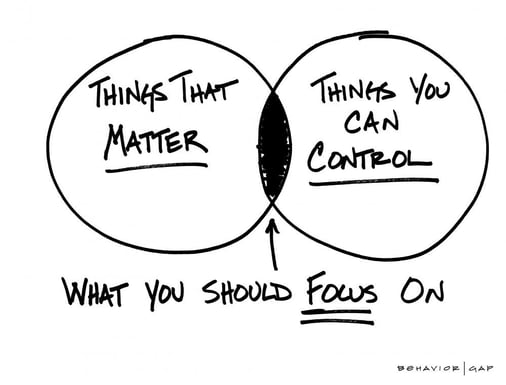 I have known some investors who check their investments daily.

For me, more than once a quarter is still too frequent.

This is because the evidence shows it may also:

But paying too much attention costs more than just time.

The longer you are investing for, generally the more risk you should be taking on.

An experiment by two Nobel Prize-winning behavioural scientists aimed to prove this by showing students investment returns from the same portfolio for various timelines: a month, a year, and five years.

They found that the shorter the time period the returns were generated from, the less risk the students were willing to take.

These results were also replicated among workers who invest in their company retirement plans.

In fact, one statistic becomes clear…

If you’re checking performance of the stock market daily, chances are that you’ll see a loss about 50% of the time.

If you check on it just once a year, that chance drops to about 25%.

At seven years, the chance of seeing a loss drops to 1%.

When you look at short-term returns over the years...

It may feel riskier than it actually is…

Because you’re paying attention to those short-term losses.

Since markets are efficient, and generally tend to move in an upward direction over time, the likelihood you’ll see gains generally increases as time increases.

As seen in the gradual increase over the past decade below.

If you have to check anything daily, check your cash.

Forget about your equities for about a decade.

The past won’t help the future

As humans, we are emotional.

Emotions make us prone to many biases.

As investors, these can be extremely damaging.

Apophenia is the human bias to see patterns when there are none: faces in tree trunks...

If a simple pattern isn’t apparent, we’ll imagine that there must be a complex one to explain it.

Now apply this to the financial markets.

We see a pattern of the market going down, and we think that it will keep going down.

We then kick ourselves when the market rises the very next day.

Most high-net-worth investors won’t admit to doing this.

But data proves it.

Investment professionals and DIY investors are getting it wrong

A 2008 study looked at the decisions of professional retirement fund managers.

They tended to put money into funds, which had substantially higher returns.

They tended to take money out of funds with worse performance.

The funds they put money into went on to underperform and you guessed it, the funds they took money out of performed better.

They chased the performance of the funds, reacting to changes after the fact.

And earned lower returns in the process.

A 2019 study by Morningstar showed the same behaviour from individual DIY investors.

A 2014 study by Vanguard found that performance chasing could cost an investor between 2 to 4% per year.

Bear in mind that annual expected returns on stock portfolios are generally in the 5 to 7% range.

All because they paid attention to the recent past.

Proving that it’s not just your time you are wasting but your returns as well.

How can you feel happier about your investments?

I’ve talked about loss aversion before.

Simply put, it means we feel losses more powerfully than we feel gains.

In this scenario, you’d be unhappy the vast majority of the time.

That’s a lot of time to feel unhappy.

The next time you feel the urge to check, consider the emotion that drives this and if you’ll actually benefit from doing so.

Imagine the time, pain and money you may save.

Time you can spend with your loved ones and doing things you enjoy.

The possibilities are endless!