Is gold a good investment?

One cubic foot of gold weighs half a ton.

All the gold in the world fits inside an Olympic swimming pool.

In fact, gold is so rare, that the world pours more steel in an hour than it has poured gold since time began.

The case for gold as an investment asset is also an interesting one.

It’s widely accepted that gold is a safe haven when markets are choppy.

Some also say it helps to maintain purchasing power at times of hyperinflation.

But gold is just metal.

It generates no income whatsoever.

It will only ever be worth what someone is willing to pay for it at any given time.

“This type of investment requires an expanding pool of buyers, who, in turn, are enticed because they believe that the buying pool will expand still further. Owners are not inspired by what the asset itself can produce – it will remain lifeless forever – but rather by the belief that others will desire it more avidly in the future...”

I’m often asked whether investing in gold is a good idea...

I want to present evidence to help you make a personal decision about whether to hold this precious metal – or not.

Recent performance of gold is lacklustre

In the UK, the price of gold has floated freely since about 1979.

The following graph from gold.org shows the price of gold before and after inflation in the 30+ years since 1979... 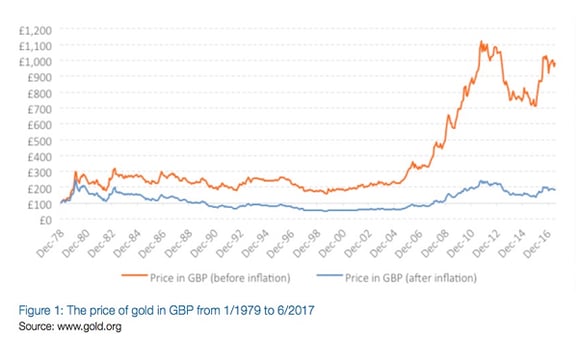 At first glance, the price of gold before inflation may make you think it’s been an incredible investment.

Look at that orange line go up!

The disappointing reality is, after inflation, gold has been a pretty lacklustre performer.

Drawing a line from its high in February 1980, it took until 2011 to get back to that former level of purchasing power.

Is gold worth holding as a hedge or a diversifier?

Many accept that gold is a good hedge against inflation, and a decent diversifier when markets tumble.

So, let’s look at the evidence behind these claims by examining its performance between January 1979 and June 2017.

1. The performance of gold vs equities:

It delivered an annualised annual return circa 5% lower than equities and its volatility was comparable to equities.

As illustrated below, there’s no discernible relationship between gold and equity prices over this period.

This table accounts for the risk and returns characteristics of different assets from 1979 to 2017.

2. Gold is a defensive asset when markets crash

As a defensive asset during the first crash, gold helped a bit.

But no more so than high quality, short-dated bonds.

During the credit crisis, however, holding gold would have helped.

However, the price of gold plunged circa 35% once the crisis was over.

Fear can drive up the price of gold...

But exploiting that to your advantage isn’t easy!

3. Gold is a hedge against inflation

For over 2,000 years, gold has kept up with inflation.

But over a more realistic investor timeframe, the evidence suggests stocks and index-linked gilts provide better opportunities to hedge against inflation.

Their data showed inflation for each decade in relation to the gold price was uncorrelated, except for during the 1970s.

Should you invest in gold?

Making the metal a costly addition to any portfolio.

So, considering all the evidence, should you diversify into gold?

I don’t think so.

Gold comes with equity-like volatility, and whilst it has occasionally provided defensive returns during some market declines, its performance cannot be predicted or exploited.

Over a realistic investment horizon, gold proves to be a poor hedge against inflation.

And never forget gold is just a metal – it generates no income.

It will only ever be worth what someone is willing to pay for it.

Therefore, gold doesn’t provide effective portfolio diversification – nor will it improve your portfolio.

Buy some for its aesthetic value in the form of jewellery maybe, but don’t pack out your portfolio with bullion.