One simple way to get your children interested in investing

As I approach my 40th birthday, my thoughts turn increasingly to the future...

In particular, my daughter Sophie.

Because, as we know, success in investing often has more to do with the time you have in the market.

More so than the returns you generate each year.

And here's how I will ensure she starts early...

As someone who bought his first stock when he was 12 years old, I know that a key to building lifelong investing habits from a young age, is getting the child's attention.

By finding a company (and stock) they can understand.

As regular followers of my emails will know, my family is Disney-crazy.

We've been to all the theme parks, done the cruises and literally, got the T-shirt.

So, what better way to get my daughter interested in investing, than starting with her favourite thing in the world? 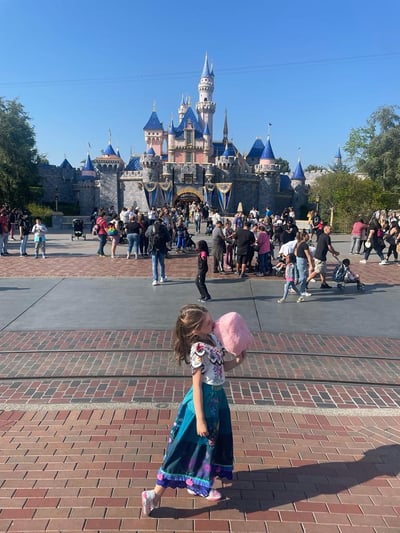 Planting a seed that she can own a very tiny piece of, let's say, Disney World.

As she gets older, she will come to understand that any dividends will go to her as extra pocket money.

A great starter for children

Walt Disney is the media giant behind some of our most beloved entertainment properties, through Marvel, ABC, ESPN, Pixar, Lucasfilm, and key Fox assets.

Not to mention some of the world’s most visited theme parks.

So many identifiable, kid-friendly touch points.

Making it a great starter stock for children.

Either way, it's fairly simple to get kids excited about Disney, which can lead to discussions about how we can own a piece of the company that makes the shows and movies they love.

Me and my wife Lisa, Disney World California, 2022

I've even explained to her how the Disney+ app costs money, but some of that money is ours because we own Disney stock.

This can be extended to movies at the cinema, action figures, theme park trips and cruises, and everything Disney does.

Disney's business model is also easy to understand for even the youngest investors.

The more people who buy Disney+ means more money to make shows like The Mandalorian (one for me). This then attracts more subscribers.

A new ride at a theme park, say the highly anticipated Guardians of the Galaxy: Cosmic Rewind, opening in 2022, means more people visit and the park makes more money.

Leading to a new ride next time...

Disney can also be an early introduction to dividends.

The company pays a modest dividend that yields about 1% today, but the idea that you can be paid just for owning a stock may be a brand-new concept to your child.

This leads to a longer-term lesson about profit and dividends.

Current state of the stock

Disney is still recovering from the impact of the pandemic, but with parks opening and streaming growing, there's a lot to like about it as an investment.

For the second quarter 2022, Disney reported $6.65 billion in parks, experiences, and products revenue and $1.76 billion in segment operating income.

That is the highest second quarter revenue and operating income for that segment in Disney's history.

Higher than the previous record of $6.17 billion in revenue and $1.51 billion in operating income achieved in Q2 2019.

All despite the omicron variant (especially in January).

Disney also booked a $268 million loss from international parks and experiences, mainly due to closures at Shanghai Disneyland and Hong Kong Disneyland.

These two obstacles make Disney's results all the more impressive.

Now, I’m aware Disney’s stock is currently down around 50% from its all-time high and we could see a slowdown in Disney's business.

A lot of that is probably being priced in.

But it's likely to only improve from here over the long term.

Most importantly, it looks like Disney's brand is as strong as ever.

A lifelong path to wealth creation

Have a think about what companies your children or grandchildren engage with regularly - and use this as a way to get them excited about owning a piece of it.

Wealth transfer is a topic I have covered many times.

This is an important aspect of financial planning for all affluent individuals and should be factored into conversations you are having with your planner.

But many studies have shown that those who begin wealth creation early not only enjoy higher returns than those who start later in life, but are also more successful generally, than those who are financially supported by older generations.

As Sophie gets older, I will explain the benefits of a globally diversified portfolio, for long-term wealth generation.

Personally, I remain invested in DFA World Equity (100% equities), and don’t see this changing for many years.

For Sophie, owning a little piece of her favourite thing in the world is a great start.