I recently met the Managing Partner of an international law firm.

He explained he often avoids talking about his profession at social events.

Inevitably, when people discover he's a top lawyer, they deluge him with questions...

It's a scenario I understand well...

When people learn I work in finance, often the next question is: “Can I ask your opinion about my pension” or “So what are your thoughts on the current stock market performance?"

Of course, I love what I do and sharing my thoughts on the world of finance.

The next question is one I am asked even more often.

Surprisingly, not so much by the top executives and business owners who I tend to look after but much more by the new investor, DIYer and smaller clients and hobbyists.

So I thought I'd discuss the question, and my answer, here to share with you all.

Which fund is better, Dimensional or Vanguard?

Both are great, have strengths and weaknesses, and are better than what 99% of international investors are invested in.

If I could wave a wand and move all the trillions of dollars sat languishing in low-interest deposit accounts with banks, toxic structured products or poorly performing active funds portfolios - to either of these, I would.

Pick either one and you’ll likely have made a good choice.

However, there's a deeper explanation I'd like to get into to better explain how they are individually set up to capture returns.

There may be some industry jargon along the way (which I usually try to avoid) but I promise to do my best to simplify it...

What are their differences?

The main differences between Vanguard and Dimensional Fund Advisors’ index funds are:

1. They use different indexes

2. They have different charging structures

3. They have a different approach to fund management

Vanguard has more than 60 unique funds to choose from and each fund tracks an index in a bond or stock market.

The firm is owned by its fund shareholders, meaning it’s essentially a non-profit.

As a result, the average Vanguard index fund expense ratio is very low (82% lower than the average mutual fund).

Dimensional (DFA) on the other hand, doesn’t simply track an index (lagging it by tracking error and the small cost), they custom design their funds to try and capture risk factors - such as company size and value - to maximise expected dimensions of return for their clients.

They “tilt” their portfolios: this means they have an investment strategy that attempts to enjoy better fund returns by having a heavier weighting of certain stocks that have historically delivered higher returns than the stock market.

In the case of DFA, they tilt towards small-cap stocks and value stocks.

Small cap is a term used to classify companies with a relatively small market capitalisation - between $300 million and $2 billion.

A value stock is considered to be trading at a lower price relative to its fundamentals - like dividends, earnings and sales.

It is considered undervalued by a value investor.

DFA says they have other advantages over traditional index funds like Vanguard’s too.

For example, when a new stock enters an index, a traditional index fund has to add it all at once, and this can push the price up before the purchase is completed.

But because DFA is working to characteristics not names, they build their portfolios differently.

In theory, this means they can avoid a cost bump that pure stock-list-following index funds can experience.

According to Andrew Hallam writing for Asset Builder:

“[DFA] also built [their funds] by the characteristics of each stock, rather than duplicating an index that roughly identified a characteristic.

These funds cost more than traditional index funds, but their back-tested studies said the cost would be worth it.”

Which brings me to my next point…

Such an active-passive approach is called ‘smart beta’ in the industry.

“DFA’s funds have beaten the broad U.S. market. But that’s to be expected because DFA tilts its funds towards value and small cap stocks.

Overall, the Dimensional Fund portfolios produced both higher compound returns and risk-adjusted returns compared to the Vanguard market-capitalisation-weighted portfolios over the years.

However, there have been some time periods where the Vanguard portfolios outperformed the DFA portfolios.

Every DFA U.S. equity fund that existed when the new millennium began has since outgained the S&P 500.

That is a record unmatched by any rival fund company.

The research shows that for a long-term investment strategy, representative funds from Dimensional have outperformed on a relative basis against Vanguard.

In the table below, we compare a select group of popular Vanguard index mutual funds that track major asset classes. The chart shows the annual return of equivalent Dimensional and Vanguard funds from 2000 until March 2021.

Across large value stocks, the difference in return is negligible.

However, it's in the small-cap and value-focused funds that Dimensional excels.

Leading academics like Eugene Fama and Kenneth French (who are also on the Board of DFA) believe that favouring value stocks comes with higher expected returns over time.

As mentioned earlier, in nearly all asset classes, DFA is more heavily weighted to smaller-sized stocks (which historically outperform large caps over the long term) than Vanguard.

So what's the verdict?

Pick either Dimensional or Vanguard and you won’t go too far wrong.

As the picture below shows, most of the world are still invested in traditional active assets or worse (in red).

Passive Index funds are better (in blue) as they lag the market by cost and tracking error. 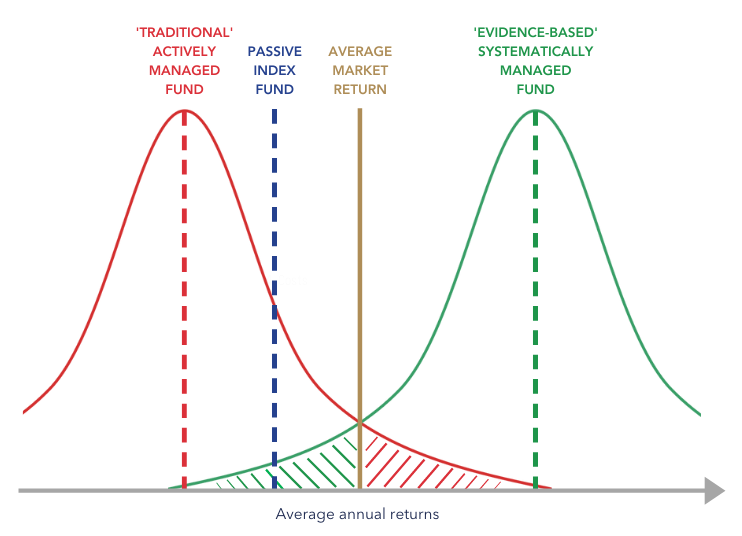 However, there is a far more critical factor that can make all the difference to your returns.

And that's who you choose as your lifetime financial partner.

“Knowledgeable, evidence-based advisers help maximise investor success, because they provide the critical discipline needed to combat emotional, reflex reactions - like pulling out of the market the way so many did in late 2008, early 2009, or in 2011.

Evidence-based or systematic advisers not only help to manage an investor's emotions, they serve as fiduciary stewards of their clients' wealth.”

In other words, choose Vanguard, choose DFA, or choose a different ETF altogether - but choose to work with a chartered evidence-based fiduciary with a strong, documented investment philosophy if you want the returns that are right for you. This is because:

So, Dimensional or Vanguard?

It depends on you, your personal circumstances, goals and financial situation.

The financial world can be murky, full of complexities and nuances that are difficult to navigate alone.

A professional, certified fiduciary is perhaps best suited to help those with a high degree of complexity, a limited amount of time, substantial capital and ambition to maximise not only their return on investments but also their return on life.

My team's on hand whenever you're ready.