Retiring early in 1957 vs today

I’m taking a trip down memory lane to see what early retirement was like back in the day.

Inside, photos of care-free families dotted the pages…

Men and women in their prime…

Spirited, full of energy and seemingly doing the things they love.

The most interesting thing about the article?

It felt like it could have been written recently.

Yet, he quit his job, got married and bought an orange grove.

Caption from LIFE. Joel Brecheen enjoys the pool he built in Phoenix, Ariz. with his wife and their two children Alfred Eisenstaedt—The LIFE Picture
Collection/Getty Images

He remodelled a house, built five rentable apartments, tennis courts and a pool.

(An expert at DIY, clearly).

Along with his property rentals, he also taught swimming and tennis lessons which brought in a good sum of money - around $8,000 per year ($76,000 today).

Earning more or less what he did as a salesman, Joel now had more time, worked less and saw more of his family.

(Things many of us wish to have more of as well).

Arthur and Kathryn Lynch wanted to get away from it all.

They earned money along the way from part-time jobs – earning a standard $3 an hour for anything from patching roads and fixing power equipment to working as a consultant engineer on a new island resort.

The two found their own piece of heaven.

Which was remarkably simpler than the life they lived as research chemists.

In 1948, Joseph B. Wertz, left his contract job with the government.

He had reached a level of success that came with too much pressure.

And too little time for his hobbies and wife.

So, he gave up his job for a more artistic, fulfilling life.

(Which turned out to be every bit as busy).

He and his wife trawled the western USA in a trailer, eventually deciding on a home in New Mexico.

They remodelled a stable facing the river into a sprawling mudbrick house.

There, he made pottery and furniture. 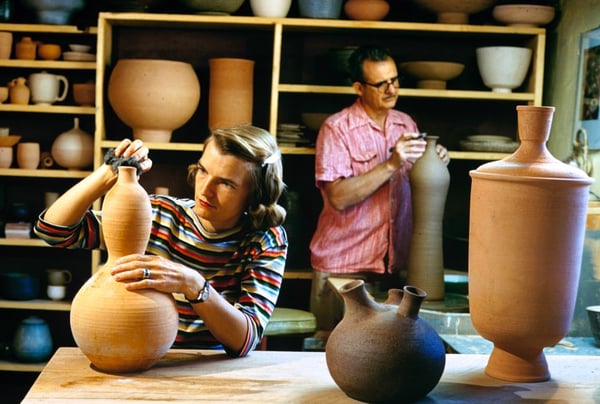 He also painted, sculpted, photographed and smithed silver, which he didn’t do for profit…

While they lived comfortably off the annual income from their investments.

Eventually, they had so much money left over, they put some in a trust for their son.

Can you see the parallels?

Despite the obvious differences between that decade and our own, people’s wants and needs have barely changed.

More opportunities to turn your passion into an income stream.

And certainly not for everyone.

Some throw caution to the wind with very little savings.

Others have a substantial nest egg to see them through many happy years.

If you’re looking for an early retirement, we strongly recommend the second option.

It will be a lot less risky and give you more peace of mind.

Chat to us if you want advice on how to save more for retirement.

Or, if you’re just looking for a second opinion on your portfolio.