5 types of recession, when they've happened and the dream scenario we all hope for (plus the nightmare to avoid)

A recession seemed all but inevitable last year.

I wrote about it a few times.

After all, there's always a 100% chance we will have a recession at some point...

A war in Europe.

Not to mention stocks and bonds in free fall...

The year came and went, with no recession.

Two-thirds of economists expect one in 2023.

However, not every recession has to be a catastrophe.

Yes, it would of course be painful for those affected by unemployment.

But the losses could be limited and the duration, relatively short.

As I've said before, you should always be ready for A recession rather than trying to get ready for THE recession.

Given what we know from history, you should expect events like this to happen.

Your best choice is to take a long-term view and be in the market (as it often tells a different story).

That said, there's no harm in knowing how different recession 'shapes' can affect your investments.

It could help you catastrophise less and see opportunities more.

Recovery shapes are used by economists to characterise different types of recessions and their recovery.

The shapes take the form of letters, named after how each recovery looks when charted on a graph (showing the overall health of the economy).

They make it simple for investors to discuss the complexities of an economic downturn, and how long it may take to recover.

All recessions begin the same way, with a significant period of economic decline.

But how they end can happen in different ways. 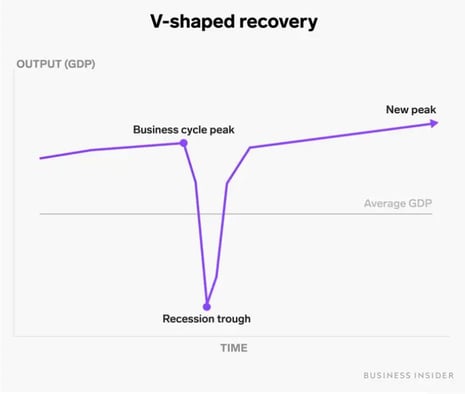 This is the lesser of all evils.

The V-shaped recovery is the shortest type of recession.

The dream - if there is such a thing.

In a V-shaped recovery, the economy experiences a sharp decline but then bounces back almost immediately to its pre-recession level.

The period in which the economy remains at a low point (the bottom of the V) is extremely brief.

When has this happened before?

One example could be the recession of 1953, in which the economy achieved a full comeback by the first quarter of 1954, less than a year after it first declined.

It helped that the downturn was fairly mild, but most economists also credit the actions of the Federal Reserve — which spotted the slowdown early on and moderately increased government spending to stimulate the economy — for the swift recovery. 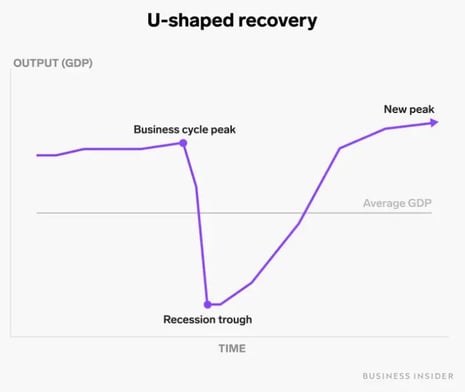 Just like the V-shaped recovery, the economic decline is steep – but the recovery takes a little longer.

The economy spends more time at the trough before improving.

This doesn't necessarily mean that the recession is more severe in terms of the loss in GDP, but it does mean that it lasts longer.

When has this happened before?

The 1973–1975 recession, in which the economy didn't resume pre-recession levels until 1976, is an example of a U-shaped recovery. 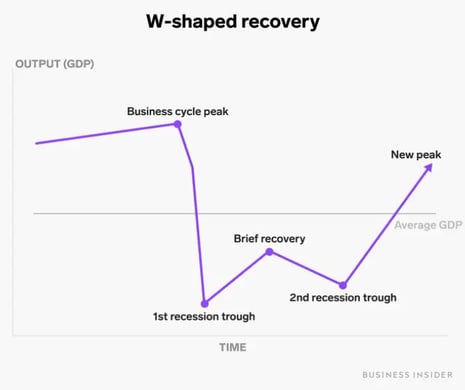 With a W-shaped recovery, you have a recession, then a mini-recovery, and then a second recession.
Also known as a double-dip recession: the economy follows the V-shaped recovery, twice.
It's essentially two recessions in one, which prolongs the impact of the first, often shattering consumer confidence.
Sometimes the nature of world events forces the economy back into a second recession, sometimes it's to do with fiscal and monetary policies (aimed at easing the first decline) sending the economy down again.
When has this happened before?
The only W-shaped recovery the US has ever experienced occurred during the early 1980s.
In January of 1980, the economy dipped and recovered just six months later.
Then, after the Fed raised interest rates to counter inflation, the economy fell into a second dip in July of 1981 that lasted 16 months. 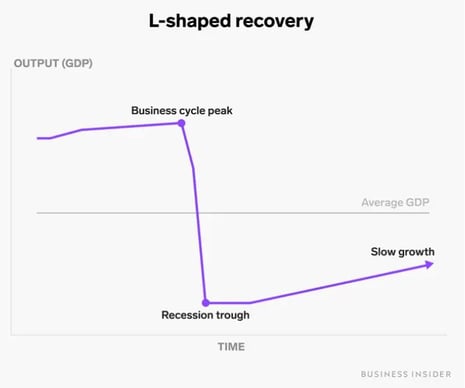 This is the worst outcome.
The nightmare.
Economic improvement hobbles along slowly, often for years.
It's sometimes dubbed a depression.
It can take years for the economy to get back to where it was pre-downturn, and in some cases, this slow revival drags on indefinitely.
When has this happened before?
Naturally, the Great Recession springs to mind as an L-shaped recovery.
Although it technically lasted only from 2007-09, as measured by GDP, many other key economic indicators didn't reach their pre-recession levels for four to six years.
And a decade later, the overall economy still struggled, lagging behind pre-recession projections. 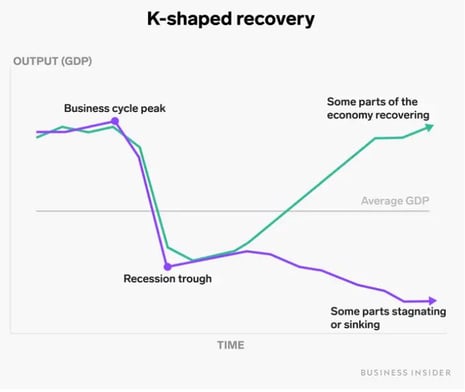 A K-shaped recovery means recovery for some, but not for others.
It's fairly new and a bit different from the others, created in the aftermath of COVID-19 (used to describe what economists saw happening).
One segment of the economy trends upward — experiencing more of a V-shaped or U-shaped recovery...
While another either sinks further or recovers much more slowly, like with the L-shaped recovery.
Hence the two diagonal lines in the letter K - one up, one down.
Both industries and individuals can be affected.
When has this happened before?
Thinking back to COVID, and some industries were able to continue or even thrive (i.e., high-tech and e-commerce).
Think of Zoom.
Its stock rose by almost 6x from the start to the end of 2020. Its revenue was up 367% that year.
Others suffered a major slowdown or were ground to a halt (i.e., travel and hospitality, arts and entertainment).
Think American Airlines, whose Q4 2020 revenue was down 64% year-on-year, and who reported a full-year net loss of $8.9 billion.
The V-shaped and U-shaped recoveries are the most common, although the other shapes are far from unheard of.
Hope for the V, but prepare for the L.
Stick to your long-term plan.
Because of course, when in a recession, it's impossible to know for certain what shape economic recovery will take.
However, once key economic indicators respond, we have an idea of how the economy might - which can offer some guidance on financial decisions.
We can't see into the future, but understanding the nature of each recession helps us better prepare for the next.