There's a lot of bad press about index investing. Here's why

Guest post from Robin Powell of The Evidence-Based Investor blog...

We often talk about steering clear of financial news.

The media has conflicting information and biased views.

Not to forget that bad news sells fast.

It's no wonder there are thousands of articles fuelling debate around indexing.

So what's the verdict?

Is indexing good or bad?

Despite making investing easier, cheaper and more efficient for everyone.

Here are seven popular myths about the growing popularity of passive investing.

(They should all be taken with a pinch of salt).

If you look at the evidence, this is not true.

Only around 20% of global stock is owned by index investors.

Even in the US, where passive’s popularity is greatest…

In large parts of Europe, Asia and South America, indexing has barely made inroads at all.

Myth #2: It’s inflating the prices of the biggest stocks

This is not how indexing works.

If the price of a stock rises, its weighting in the fund increases automatically.

The fund doesn’t need to keep buying more shares, or indeed sell shares in companies whose stock is falling.

The vast bulk of trading — around 95% of it — is done by active managers.

There is more price-setting going on today than there has ever been.

More than eighty million trades are placed every day.

That seems like a pretty efficient market to me.

By forcing the worst performing fund managers out of business, indexing is surely making markets even more efficient?

Allocating capital to the most deserving enterprises is an important function of active managers.

But new public offerings account for a limited amount of trading.

The vast majority of the time, active managers are simply trading with each other.

Whereas, passive managers have no choice but to carry on holding stocks and to work with company management.

They're actually better placed to make a positive difference.

And increasingly, evidence shows that they are bringing their influence to bear. 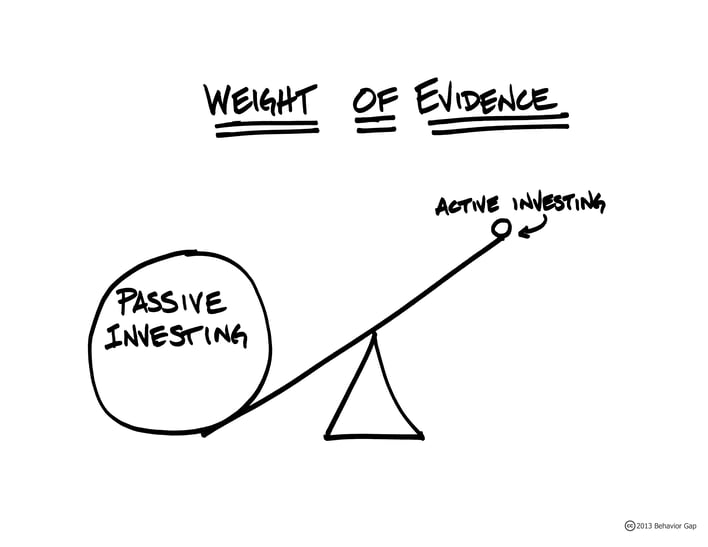 One of the most common myths about active managers is that they outperform passive managers when markets fall.

(The data clearly shows they don’t).

It’s also suggested that indexers will bail out when the long bull market finally ends.

Yet, exactly the opposite happened during the global financial crisis.

It received a lot of attention.

But there are two reasons to prove it wrong.

First, indexers believe in the capital markets more than anyone.

They believe markets work and that, over time, they deliver fair returns to those who patiently invest in them.

Secondly, indexing allows consumers to invest in far more stocks, far more efficiently and far more cheaply than ever before.

Surely, if anything, indexing is the very essence of capitalism.

Why the bad publicity?

So, why are these myths about index funds so prominent?

Can we expect them to persist?

Larry Swedroe, the US investment author, summarised it neatly when he recently wrote:

“Proponents of active management will continue to attack passive investing. In almost every case I’ve come across, these attacks not only are without foundation, they also are absurd and easily exposed as such. But that doesn’t stop them. The reason is simple: Passive investing threatens their livelihood.”

Active management has been proven time and time again, it’s simply not the best investment approach.

It’s far too expensive and stressful, and only benefits active managers themselves.