My favourite country music song is The Devil Went Down to Georgia, by the Charlie Daniels Band.

The devil is behind on his quota for souls.

He finds a fiddler named Johnny and offers him a deal.

He and Johnny would compete to see who can best play the fiddle.

If Johnny plays better than the devil, he wins a golden fiddle.

If Johnny loses, the devil gets his soul.Johnny rocks it, and the devil flees with his tail between his legs.

If you’re wondering how this relates to bonds, please bear with me.

In a sequel to the song (I totally made this part up) the devil strolls into a pub filled with Manchester United fans.

“I’m going to make you collectively choose one of two options,” he says.

I’ll make every member of Manchester United age 18 years older for the next two seasons. But after that, every player will play at his peak for the following five years.”

Before hearing Option 2, an Old Trafford regular asks, “What do you mean by peak?”

The devil responds, “Consider Cristiano Ronaldo. I’ll make him the age he was in 2014. He was faster, younger, better. That was, or was equal to, his best year ever.”

“And what about Manchester United’s youngest guys?” asks a keen-eyed woman standing beside the pool table.

“I know what future year they’ll peak,” smiles the devil.

"Three years from now, I’ll put them each at their future best.”

“But Manchester United’s management will trade every player on the team for a batch of guys you haven’t heard of.”

To make this sound better, the devil adds, “There might be some great unknowns in South America, Africa and Europe. But choose carefully between Option 1 and Option 2. If Manchester United doesn’t win the league championships at least once during the next six years, I take every one of your souls.”

But it offers extremely high odds of future success.

Each of Manchester United's players would turn old, right away.

Even their youngest players would be in their late 30s.

But after two years, they wouldn't just revert back to the way they were.

Instead, they would each play at their prime.

But it favours the devil.

After getting bested by Johnny the fiddler, old red-face is really hungry to collect those souls.

In many respects, they’re like professional football players who suddenly aged 18 years.

But this was a big drop for bonds.

Bonds were paying a paltry 1 or 2 percent interest rate per year.

But when global banks increased interest rates and inflation accelerated, nobody wanted bonds that paid such low rates.

Investors dumped those bonds like a really bad date.

Their prices then fell, as demand dropped off. 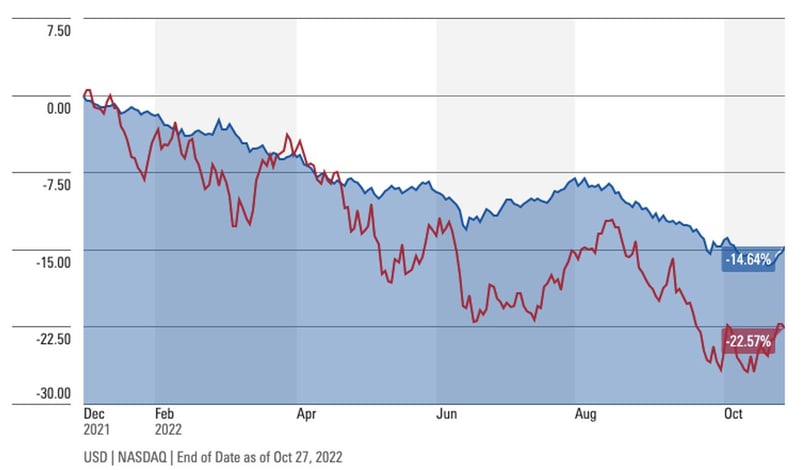 But a bond market index fund is a revolving door of bonds.

For example, each bond within an index has a different maturity date.

In other words, bond index funds will be in their interest-paying prime, much like the devil promised peak football playing years.

Plenty will metaphorically jump at the devil’s Option 2.

Many will trade into different things with no way to see their future.

That’s why investors in diversified portfolios of stock and bond market index funds should remain loyal to their team.

If they have money, they should keep adding more.

They should also rebalance their portfolios to maintain a consistent allocation.

The devil might not walk into your local pub or offer you a golden fiddle.

But investors who act on fear and greed will likely end up dancing with demons of their own.