In this blog, I'll debunk a retirement myth.

It’s going to free up your thinking.

And maybe free you up to retire much sooner than you thought.

You have to save to accumulate a nest egg sufficiently large to replace your employment income...

And that sum has to sustain a stable standard of living throughout your entire retirement.

If you haven’t saved enough to maintain your current lifestyle in retirement for the next few decades, then you can’t retire.

None of this is true.

Because there’s a growing body of evidence to show spending levels decrease significantly as we progress through retirement.

As a result, the conventional thinking laid out above is no longer the accepted truth among forward-thinking financial practitioners.

As this article will show, this may mean you can bring forward the day when you get to do whatever you like with the rest of your life.

From go-go to no-go: how spending reduces with age

The traditionally held view of retirement spending is that you will generate enough income to replace your earnings.

And through so doing, maintain your existing standard of living when you stop working.

But from the taxes you currently pay on your salary, to the intensive investment approach you’re committed to in order to build up a pension…

There’s more than a handful of expenses that won’t be relevant to you when you retire.

So, instead of replacing 100% of your salary – you may only need to replace 70% - 80% of pre-retirement income to enjoy your current lifestyle in retirement.

The financial savings don’t stop there.

Whatever your actual expenses will be in retirement, conventional thinking is that you need to support them at a continuing rate, indefinitely.

But that’s not an accurate reflection of retirement spending patterns.

Why you don’t need as much money as you thought

Retirees alter and reduce their spending behaviour over time.

Author of The Prosperous Retirement, Michael Stein, identified three phases of retirement in terms of spending… 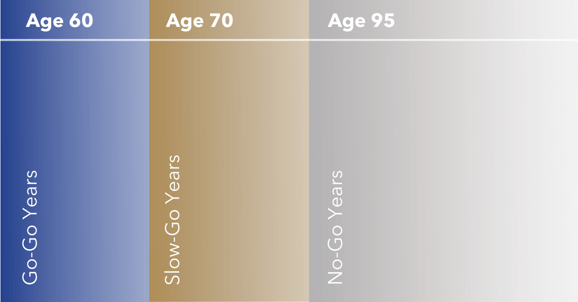 In retirement, our spending will slow down year by year.

What’s more, the underlying composition of our retirement spending will begin to shift as well, as we move through these age bands.

Spending on housing and entertainment activities falls significantly in the later years, for example.

But, one caveat before you get too excited...

Some expenses may well rise, like healthcare and home help.

Still, however, all the evidence proves that discretionary spending just keeps on falling away – and it falls by more than health and care expenses rise.

Ultimately, this means there is an overall and steadily consistent decrease in spending as we proceed through the age bands and our retirement.

This means you may need far less money to retire on than you originally thought, and than any financial adviser previously led you to believe.

Perhaps you’re much closer to achieving your retirement income requirements already – and you can retire sooner.

So when should I retire?

A comprehensive financial plan is then created to get there.

To help you get started, we offer a no-obligation, 15-minute discovery call where you can find out how you can best put your money to work.

After all – if you can retire much sooner than you planned…

You need to know as soon as possible.