[Updated for 2021] How being a patient investor guarantees success

I was watching Peaky Blinders the other night.

The episode that takes place during the stock market crash of 1929.

The protagonist, Thomas Shelby, is upset about not withdrawing his money.

Worried he may lose out by staying invested.

Of course we know the opposite to be true…

There’s a lot of uncertainty in the world...

Almost daily, high-net-worth investors are reaching out for guidance.

“Should I be worried about the latest currency fluctuations?”

“I have a property in Hong Kong, should I consider selling?”

“Is now a good time to buy gold as an inflation hedge?”

No one likes doubt and uncertainty.

These emotions incite us to take action.

But the thing about investing is… 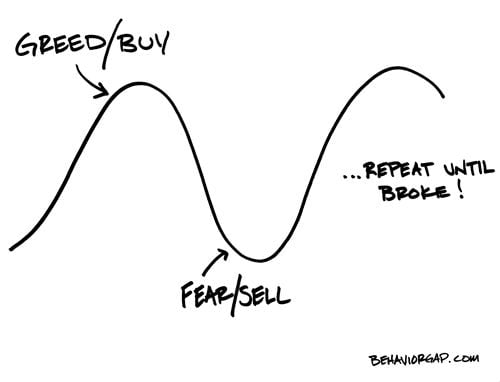 We don’t know what will happen in the markets an hour, day, month or year from now.

One of them is Rescue Your Money by Ric Edelman.

It’s a great read for anyone wanting to know how to invest in uncertain times.

In it, he mentions how a long-term focus is vital to achieving your investment goals.

“You must maintain a long-term focus for one simple reason: It’s the only way you can be certain you’ll capture the profits that investments offer – and avoid taking the full brunt of occasional downturns.”

When there’s market volatility, do you continue to invest systematically and consistently?

Or are you prone to reacting?

It focussed on investors who stayed with the same investment from 2008 through 2017.

Over this time, their investments grew by a 147%.

That's twice the average 74% return for those who fled their investments during the fourth quarter of 2008.

These investors were buying.

They inevitably bought more shares with each dollar.

When those shares rose, so did their investments.

Another reason to stay patient and disciplined is that the stock market’s gain only occurs over very short periods.

During years of market crashes, the market will often recover all or most of its losses during a brief period.

So, if you react to the market’s volatility by constantly buying and selling…

You could lose out on the year’s gains or sustain bigger losses.

Now imagine if you stayed invested during this period.

It’s common for the stock market to jump in short bursts and long periods of stagnation to follow.

Can you predict when these short bursts will happen?

Neither can your financial planner.

The two most important things a high-net-worth investor can do to build on their wealth is:

In 2007, the behaviour of elite goal-keepers was examined.

The optimal strategy to achieve better results is actually to stay in the goal’s centre.

In other words, do nothing at all.

Something that applies to investors too.

Do you understand the benefits of staying disciplined and patient?

There’s nothing you can do about it.

But one thing is undeniable…

And that’s the evidence proving a long-term, disciplined and patient investment approach is key to achieving your financial goals.

When markets collapse and the media’s headlines encourage you to sell, remember that the only way to make those losses concrete…

Is to cash out.

But the right thing to do.

I hope this provided the clarity and confidence you need to control the way you view and react to what’s happening in the markets.