How will a no-deal Brexit affect my UK investments as an expat?

The uncertainty regarding their futures…

Not to mention UK pensions and investments…

Hangs heavy over them.

One particular client emailed me in a panic.

“Stuart, I’m worried. I'm concerned about the possible collapse of the UK economy and the falling pound. Do I need to prepare for a potential no-deal Brexit? Am I at risk of losing my life's savings? Please advise.”

Phillip has been my client for 3 years now – ever since he moved to the UAE from the UK.

He is one of many who are worried about Brexit.

In fact, some future clients are fearful to invest at all because they feel they may lose everything.

Years of hard work and earning in a foreign currency...

(All to help them better prepare for their futures)...

May all be in vain depending on the Brexit outcome.

Being a UK expat myself, I too have my concerns.

The never-ending delays are unsettling for everyone.

But while there's so much doubt surrounding Brexit...

Here's what you can be sure of.

You can insulate your portfolio from Brexit or any other political events by spreading your risk.

Diversification diminishes your exposure to the danger of setbacks or failure of any one company or country.

It's a tried-and-tested way to cope with the uncertainty inherent in life, politics and the stock market.

In plain English... don't put all your eggs in one basket.

Understand why you're investing in the first place.

Stay invested through the inevitable ups and downs.

Spread your risk by maintaining a diversified portfolio.

And, accept that no one can ever predict what may or may not happen in the markets.

The same advice applies for those worried about the Sterling's fluctuations.

Diversification can help alleviate an array of financial woes.

A few blog posts ago, I proved just how resilient the markets are.

Despite some of the worst crashes in history, they have always made a comeback.

When you invest for the long-term, short-term fluctuations are just part of process.

You'll never know when the market will be recover...

And you could miss out on potential growth. 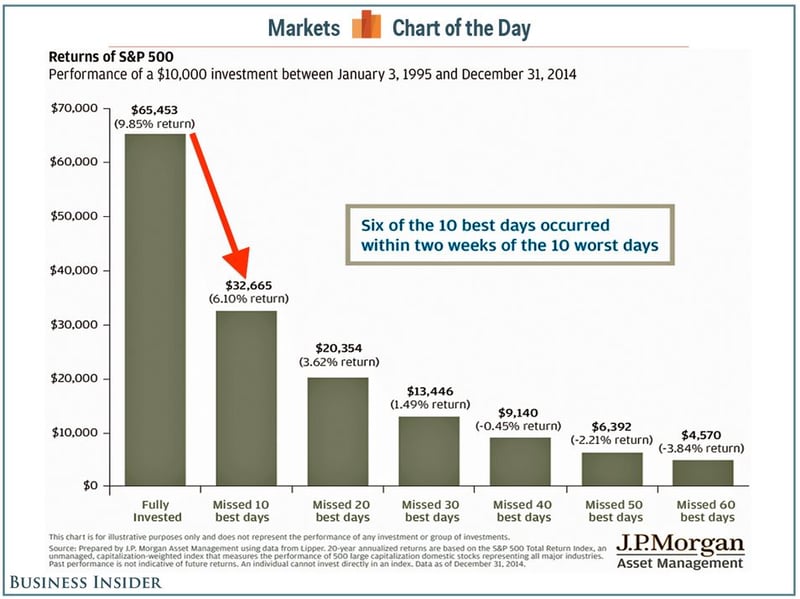 Fraudsters are taking advantage of the confusion stemming from Brexit.

They further lure you in by saying this will ‘reduce the damage’ caused by Brexit.

Or help you ‘capitalise’ on Brexit.

According to Citizens Advice, around 10.9 million unsolicited pension calls and messages are made a year with victims losing an average of £91,000 to these scams.

For some, that’s their entire life savings.

We’ve seen numerous bans on cold calls across the globe.

However, we’re still hearing from investors who’ve been targeted this way.

Know what to look out for before taking any kind of financial advice.

Whatever the outcome of the UK’s departure from the EU…

Those with a UK pension and living overseas will still receive their payments.

But exactly how much that pension will be worth, is where the uncertainty lies.

Currently, UK nationals living in the EU and various other countries have their state pensions increase with the cost of living…

Fixed at the highest rate of earnings, prices or 2.5%.

It’s expensive for the government.

Despite the intention for this to continue, it remains open to question.

And if there’s a no-deal Brexit, the level may be frozen.

(Which is currently the case for UK pensioners living in countries like Australia or Canada).

A no-deal Brexit could mean any UK insurance company paying an annuity to a UK expat in the EU would no longer be authorised to do so.

The pension provider would risk a fine by making these payments.

Instead, it might have to set up a subsidiary in the EU to be able to pay into a European bank account…

(Or make a deal with a European counterpart).

But with a no-deal, the cost and difficulty of transferring those funds into their local European bank could be greater and the currency exchange rate could be a problem.

From the other side of the mirror, the UK government said it would give temporary permission for financial firms in the European Economic Area to pay people in the UK.

Until there's a definite Brexit outcome, the best thing you can do as an existing investor...

Is to do nothing at all.

Sit tight and wait to see what happens and how that may or may not affect you.

No one knows for sure what the future holds for the UK.

It's simply outside of our control.

Alternatively, if you're a future investor...

Don't let politics, news headlines, natural disasters or any other world events stand in the way of you and your ideal future.

As I mentioned before, the markets will always bounce back.

In fact, I recently did an analysis for a future investor who was apprehensive to start investing.

I compared two recent political events; the Trump election in 2017 and the Brexit vote in 2016.

Here's how the market performed (to date) since they took place:

The numbers speak for themselves.

Needless to say, that future investor is now confidently investing in his future, despite his previous concerns.

However, if you have any questions or doubts of your own, you're welcome to get in touch.

Understandably you want to make the best possible decision for you and your future.

Regardless of what’s in store for the UK.