Is your financial adviser making promises? Read this

In fact, you may have heard it from us.

Or read about it on our website and in blog posts.

But what exactly does it mean?

The financial services profession is full of people making promises they can’t keep.

But as promises, they are impossible to keep.

The truth about beating the stock market

Markets are hard to beat consistently.

This has been proven by Nobel prize-winners.

Picking stocks on the view that prices are wrong is like betting on horses.

It can go either way.

Not even the professionals are good at market timing.

And as for guarantees, think about this…

If there were no risk in investing, why would there be a return?

Evidence-based investing is an approach grounded in empirical research.

And, the long-term observation of markets and how they work.

This is not an approach based on guesswork, gut feelings or hunches.

Nor the idea that any single person has some magic formula for seeing into the future.

It is based on verifiable facts and observation.

In a world of slick marketing, spin and hype…

The idea of respecting evidence is frequently undervalued.

As the great Scottish philosopher David Hume once said:

“A wise man proportions his belief to the evidence”.

The danger of doing otherwise was highlighted by the fictional detective Sherlock Holmes, who said if you theorise before you have the data, you begin to twist facts to suit your theories.

The truth, supported by overwhelming evidence, is that consistently beating the market over the long term is extremely hard.

And the very few who do, tend to capture any additional returns for themselves by charging high fees for their superior skills. 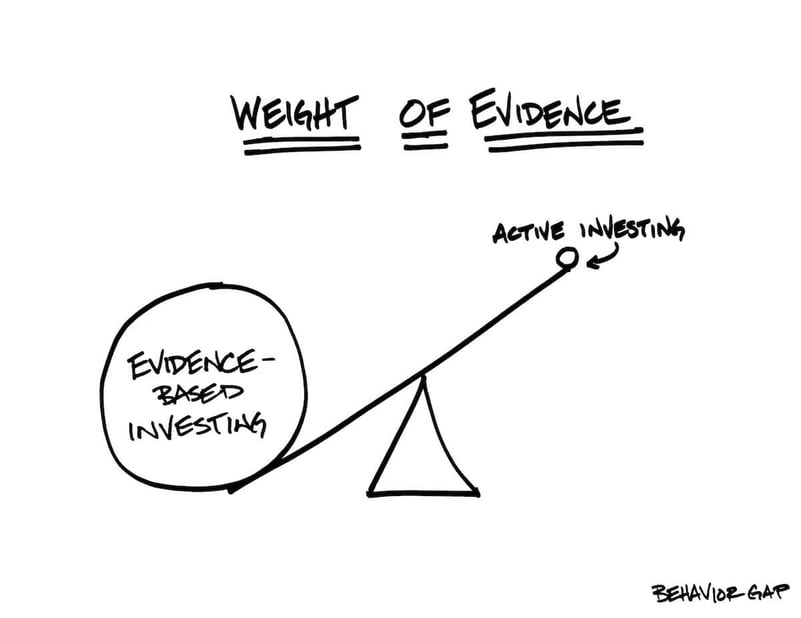 So, why are markets so hard to beat consistently?

Security prices in global markets represent the aggregated wisdom of millions of buyers and sellers.

New information, like earnings reports or economic data, are baked into prices instantaneously.

Getting an edge is tough and doing so consistently every day is almost impossible.

If one investor has a strong feeling about an individual stock being mispriced and profits from buying it, there must be a loser on the other side of the trade.

One conventional investor can only win at the expense of another.

So investing this way, by trying to outguess the market, becomes a zero-sum game.

Most of all there’s also the cost of paying the big salaries and bonuses of active managers.

You need exceptional investment performance over a long time to have any growth left after paying extortionate charges.

You must beat it by a big enough margin to cover costs and market fluctuations, as illustrated below:

Even if your view on a stock’s inherent price is rock solid based on today’s information, what if the news changes tomorrow?

A company’s advantage might be undone by new technology (think Kodak) or a disaster (think BP) or a governance crisis (think VW).

Do you know anyone who can do that?

What does the academic evidence tell us about traditional money management?

There are dozens of studies illustrating the difficulty money managers have in outperforming the market consistently:

Now you have a better idea of what ‘evidence-based investing’ means.

And, ultimately, help you reach your financial goals.

Hopefully the information you received here was helpful.

If you’d like to see whether this approach will work for you, get in touch.

The first call is free and comes with no obligation.

[2] Luck Versus Skill in the Cross Section of Mutual Fund Returns, by Fama, Eugene F. and French, Kenneth R., December 2009).