A guide to losing money – from an expat millionaire

You see, I'm getting really hacked off.

Not with you, you understand.

And not with Andrew Hallam, bestselling author of The Millionaire Teacher and The Global Expatriate's Guide to Investing either.  After all, he has kindly allowed us to edit, publish and comment on his post below, because it so clearly illustrates this infuriating injustice…

What you should have made from your investment

If you had started with $1000 and added $1000 a month into global stocks, here’s what it should look like over different time periods. 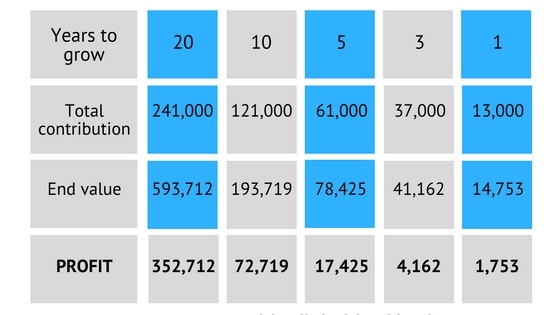 Let me explain the table.

That means the good, the bad and even the downright ugly.

Hang on, you’re saying you didn’t make that kind of money?

If that’s the case, a financial salesperson likely sold you something to benefit them, not you. Something second, or even third best, such as an an insurance linked ‘offshore pension’.

He was talking to his audience about the horrific fees that many offshore pensions may charge.

A woman came forward to speak to Andrew, we’ll call her Selena…

Selena teaches at the school, and like many expats, she was sold an offshore pension by a British gentleman (why are they always British and male? – it shames me) and she asked Andrew to look at her policy.

The fees Selena is paying are crushing: roughly 5% plus per year.

The surrender penalties are also huge.

If Selena wants to withdraw her money, she’ll lose practically everything.

The adviser who sold her this policy received a huge commission from the product company, which they will recoup over time from Selena’s account.

And that’s why they want to keep Selena’s money, and why the penalties are so high if she wants to get out of her scheme.

In fact, the provider will bleed Selena slowly, so they can recoup the salesperson’s commission and their own fees.

The massive and hidden commission the adviser was so hungry for has cost Selena plenty.

And Selena had no idea…because she was never told the truth.

You can imagine the conversation when Selena and the adviser first met:

“Hello,” said the suavely dressed Brit. “Let me introduce you to some offshore pension funds.  You’ll make a lot of tax-free money.  Have a look at these performance charts.”

The adviser probably then showed Selena some funds that had spectacular recent returns.

“We’ll get you into these great funds, don’t worry” he said.

And thereafter the adviser set up a monthly purchase plan having filled in all the paperwork for Selena to save her the trouble.

With her account set up Selena began to purchase these previously hot funds.

But does she have exposure to U.S. stocks?

Does she have exposure to European stocks?

And why doesn’t she have exposure to the world’s two biggest markets?

Well, apparently the adviser said neither of those markets had recently done well, so he didn’t bother adding them.

He needed to dazzle Selena so she didn’t look beyond his bluff.

And if he’d shown her a diversified global portfolio, he might not have made the sale, because more modest returns might not have distracted her quite so well away from the massive commission and ongoing fees of the fund!

That’s how it begins – and ends.

Things rolled downhill from here for Selena…as they do for every misguided expat investor the world over.

How much money has Selena lost?

But guess what, her portfolio is only worth US$29,006 today.

Globally, most of the world’s markets have rocketed since 2008.

But Selena has lost money.

Selena is not alone…

There is a pandemic of similar cases amongst expats.

We see cases like Selena’s every single week when new clients approach us to review their pensions, investments and savings policies.

In fact, Selena’s example is so typical because it is the case with most offshore investment platforms that the fees are outrageous and, as Andrew puts it, “the portfolios are created by commission-hungry knuckleheads.”

It would have been tough to lose money since 2008.

But Selena’s so called ‘adviser’ (salesperson) found a way.

Just like Andrew, we wish Selena was the exception.

Just how bad is Selena’s situation?

More than half of Selena’s portfolio is made up of Chinese stocks.

Since the Chinese stock market opened to foreigners in 1993, it has barely made money.

But because it did spike very briefly before Selena met her ‘adviser’, it gave him a strong selling point.

The rest of her portfolio was stuffed with gold and Latin American funds.  Each had delivered a decent run just before Selena met the shark.

They crashed after that.

I don’t have a crystal ball so I couldn’t have called the crash.

But here’s the thing, smart investing isn’t about building a non-diversified portfolio stuffed with yesterday’s winners and trying to guess the market.

But the expatriate world of financial services is like the crazy Wild West.

At Selena’s previous school, every teacher was asked (by the administration) to invest with this particular adviser’s firm. They’re the first ones listed above.

In the screenshot below, you can see that more than 50 percent of her portfolio is invested in this Chinese fund. Have you got any of these toxic policies?

If you’re invested with Aviva, Friends Provident, Zurich International, Generali, RL 360, Hansard or any other insurance linked offshore pension, your story may be similar.

Now let me tell you something creepy.

If you’ve invested with any one of these firms, I can tell you what you own.

No, I can’t read your mind…

But I know when different geographic sectors had their time in the sun.

So if you started your policy in 2007, you have a huge emerging market stock component (Brazil, Russia, India and China).  You might not own much else.

If you started this year, your portfolio will be filled with U.S. stock funds.  It could also contain some emerging markets, if you began halfway through the year.  Emerging market stocks have had a strong recent run.  The U.S. has been the best performer for a decade.

Your adviser will ignore Europe and Developed Asia.  Instead, he’ll prefer to wow you with rear view mirror driving.  That kind of practice can cause an ugly crash.

So no, Selena is far from alone. Her story is all too familiar. Does it sound familiar to you too?

What can you do?

These predators often have low morals, almost no technical financial knowledge - or both.

Don’t invest in the products they punt or the fashionable investments they vend.

Andrew’s advice is this: -

“Learn to build a diversified portfolio of low cost ETFs. Or, you could hire an ethical advisor to do the work for you.”

At the top of Andrew’s list of ethical adviser’s is Stuart Ritchie, he’s one of our Chartered Financial Planners at AES, and Andrew’s right, Stuart will build you a diversified, low cost portfolio.

Because so many people have been affected as Selena has, and because so many expats own pensions and investments that are actually costing them money, we offer the same review service as Andrew offered to Selena in the form of our X-Ray portfolio review. Having read this article, if you’re worried about your holdings, you’re an expat, and you have any form of pension, investment or savings solution worth over £250,000 please request for our X-Ray Review service here.

We will review and benchmark your holdings and report back to you with our findings – they will come with no obligation and no charge.

Once we can clearly see the situation you are in, we will be happy to discuss your options, answer your questions and help you deal with any issues.

As part of your free X-Ray we will show you if you can: -

Because of the many stories I hear exactly like Selena’s, I’ve written an industry exposé that finally reveals exactly how IFAs are paid to mis-sell pensions.

I’ve written the ugly truth about the international financial industry’s dirtiest pension sales tactics, how and why mis–selling is rife, the impact this can have on you without you even realising it, and exactly what you need to do, no matter what position you are currently in, to find a life raft and secure your financial future.

Because those who consider themselves our competitors profit from the tactics I reveal, obviously they will not want you to read these shocking revelations…

Be forewarned of their tactics and forearmed to protect your finances by registering your interest in my exposé today - and I will send you their dirty mis-selling secrets before their lawyers issue me with cease and desist threats.

AES Financial Services Ltd (“AESFSL”) is registered in England no. 06063185, its registered office being at 24 Elysium Gate, 126-128 New Kings Road, London SW6 4LZ. It is authorised and regulated in the UK by the Financial Conduct Authority ("FCA") in respect of its UK activities. Past performance should not be seen as an indication of future performance.